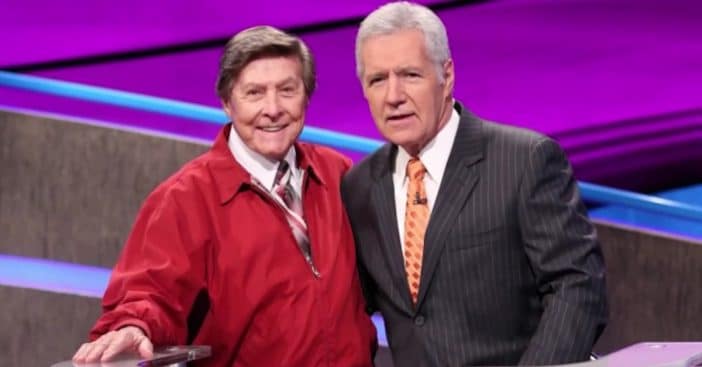 Johnny Gilbert, the announcer for the popular game show Jeopardy!, has finally spoken out about Alex Trebek’s death from pancreatic cancer. “Everybody’s walking around in a little bit of a fog, shaken from the whole thing,” the 96-year-old announcer tells PEOPLE. “Part of me left here when Alex left, really.”

Gilbert is best known for announcing the familiar, “This is ‘Jeopardy!’ Here is your host Alex Trebek.” Trebek continued filming episodes for the show until just days before his death. The last time Gilbert announced this was on October 29th.

“Alex has always been the same person,” Gilbert says, remembering his longtime friend. “He was very introspective, he read a tremendous amount and traveled a lot. He was always doing crossword puzzles to keep his mind active.”

He also had a knack for inspiring others, specifically younger people. “He was always telling the youngsters in the audience, ‘You’ve got to read, you have to learn. That’s the way you’re going to succeed,'” Gilbert recalls. He also remembers that Trebek had a love for laughter and it was always present on-set. “One gal asked him, ‘Boxers or briefs?’ Alex took a beat and said, ‘Thongs!’ I told him a long time ago, ‘If this show goes away, you could be a stand-up comedian.’ He always loved to do jokes.”

Gilbert states that whoever replaces Trebek will have some big shoes to fill (that goes without saying). “’Jeopardy!’ is a very special game,” Gilbert says. “All that information that he gave out, aside from what was actually on the show, was in his mind. Somebody has to be able to handle that. If the person lets the show be the show, it will be fine.”