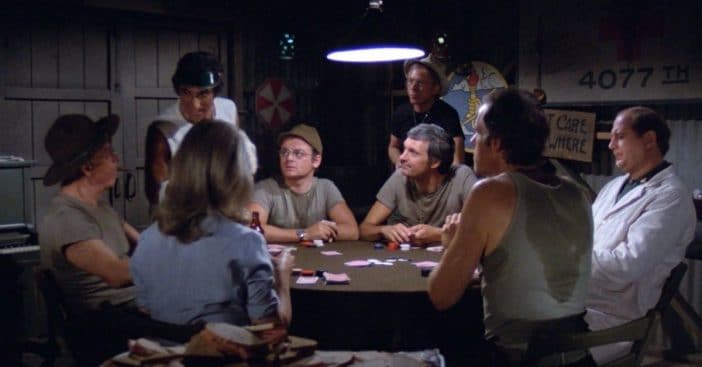 In the M*A*S*H episode titled “The Merchant of Korea,” we remember the officers and nurses gathering around for a game of poker. It seems pretty basic, but it was actually a nightmare to plot together for the show writers. “Round and round they go. Here come the cards, there goes your dough,” Hawkeye recites as he deals out the cards.

Kevin Levine, one of the show writers, notes how it was one of the most difficult scripts for he and David Isaacs to write. The problem was keeping the poker game ongoing while plotting the rest of the action going down in the scene. It’s quite a bit of multitasking for the actors and the writers! “The reason the script was so tough was because it featured an extended poker game,” Levine writes. “We’ve written poker scenes in other sitcoms and the problems are always the same.”

In addition to this, they have to write the scene so it’s easy for the audience to follow. In this case, you kind of have to explain what’s going on in the game so viewers can follow along. On top of everything else going on in the scene. And all things considered, Levine and Isaacs really had to make sure that the game flowed naturally and didn’t feel or look staged.

“You can’t take out too much or the game stops making sense,” Levine says, noting the editing of the scene. “Or at the very least, people are betting and making decisions way too quickly and unnaturally. They need time to call.”

It all ended up working out in favor of the writers

The writers really struggled with trying to keep up with the natural progression of the game. Writers would continuously follow up with questions like “How many cards have been issued?” or or “Does Hot Lips get to call before B.J.?” It was a lot of back and forth in the writer’s room for sure. Levine also notes that the actors looking in odd directions might have disoriented the viewer, noting that the camera coverage of the scene was also an important factor.

He adds that they “generally tried to make [poker games] very short or cut away to something else, so we could come back just when we needed to without having to show all the logistics that got us there.” At the end of the ropes, Levine is truly pleased with how it all came out. He praises the scene for being both clever and funny, so it’s safe to say it just worked for the show. Do you remember the episode and scene?

Click for next Article
Previous article: Reba McEntire And Boyfriend Rex Linn Are Enjoying Their Time Together In This Unusual Place
Next Post: Jennifer Lopez Finally Shows Fans Her Entire Skincare Routine