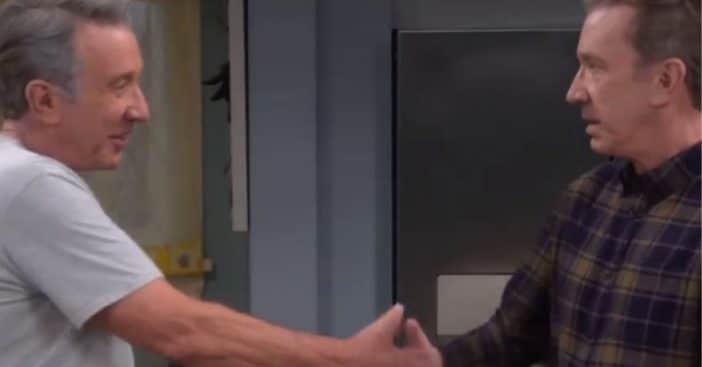 Tim Allen got to reprise his role as Tim Taylor from Home Improvement in the final season of Last Man Standing. It was the perfect tribute for fans of both sitcoms as Last Man Standing comes to an end. Tim admitted that he got very emotional while filming and he did not expect to feel that way.

The last time he played Tim Taylor was in 1999. Tim admitted, “It was very peculiar to do both parts, I’ll tell you that. It was challenging for me to do both parts and kind of emotional.” It was emotional for Tim in part because of Earl Hindman’s death. Earl played Wilson in Home Improvement, so playing Tim Taylor once again brought back memories of Earl for Tim.

He continued, “I adored the man and we kind of brought that up in the story. I started thinking about all the history I had with that TV show, how I compare it to my life on this show. It’s all about loss, is all I kept saying in that episode.”

While the scene was very emotional, it was also pretty difficult to film. He had to bring himself back to a character he hasn’t played in several decades. In addition, there was no crowd due to the pandemic, so he couldn’t play off the audience’s reaction.

Tim didn’t spoil the storyline for viewers as to why Tim Taylor appeared on Last Man Standing. However, he did say that the two characters don’t really get along! He said, “Taylor lost his TV show. Tool Time is over. He had a neighbor that passed away. He’s now working on the corporate side of Bedford Tools. That’s what he does. Baxter’s helping Tim Taylor cope with change… They’re not nice to each other. They’re kind of antagonistic.”

So, Tim will argue with himself? So strange! Will you be watching the episode on January 3, 2021?

Click for next Article
Previous article: An In-Depth Look At Carol Burnett And Jim Nabors’ Unique Friendship
Next Post: Young Melissa Gilbert Was Friends With This ‘Happy Days’ Star