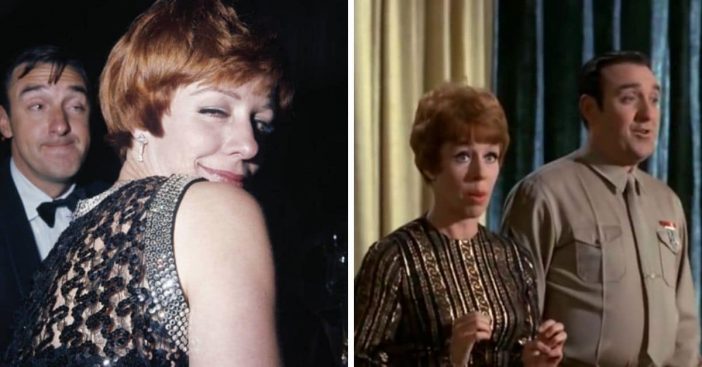 In 1966, a young Carol Burnett was at home enjoying the television show Gomer Pyle, U.S.M.C. She had yet to debut her famous sketch show The Carol Burnett Show, and yet to make her big name in comedy. But Burnett knew comedic genius when she saw it.

She was so taken with Jim Nabors‘ hit show, that she decided to write him a fan letter. Not long after this, Burnett would make a name for herself on television, and she and Nabors would meet in New York for the first time. This would be the start of a beautiful friendship.

In Burnett’s book This Time Together: Laughter and Reflection she wrote of her first meeting with Nabors, “We hit it off immediately.” The comedy world back then lent itself to close bonds between fellow stars. Less than a year into their friendship, Burnett made Nabors godfather to her daughter Jody.

As Burnett’s star continued to rise, Nabors was right there supporting her. On September 11, 1967, The Carol Burnett Show made its debut, and who was there to kick things off but Nabors. “Jim was our very first guest,” Burnett wrote. “When the show took off, we looked on Jim as our good-luck charm, so he wound up being the guest on the first show every season for 11 years.”

Burnett also got the experience of a lifetime when in 1967 Nabors invited her to appear on Gomer Pyle, U.S.M.C., the very show Burnett had been watching and admiring only a few years ago. The pair showed off not only their comedic skills but sang an impressive and captivating duet. “It always amazed me how he could talk like [Gomer] and sing like that,” Burnett told MeTV.

The television legends continued to support each other for the rest of their lives. When Nabors got his star on the Hollywood Walk of Fame, Burnett was by his side. In one of the few interviews Nabors gave, he talked about his friend Carol. And just before Nabors passed away in 2017, Burnett paid him a visit to celebrate his 85th birthday.

For more on Jim and the rest of the Andy Griffith cast, check out our Then & Now video here!