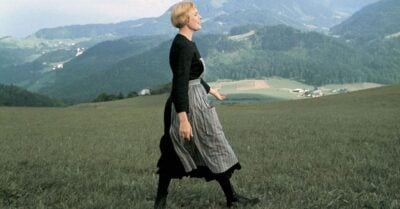 The opening scene of The Sound of Music is probably one of the most thrilling moments of the film. Viewers get a stunning view of Salzburg as the orchestra plays, building up to the beginning of the song; “The hills are alive with the sound of music…”

This opening scene was quite a struggle for Julie Andrews, though, as there was a lot of setup involved behind-the-scenes that made filming difficult for her. The book The Sound of Music: The Making of America’s Favorite Movie by Julia Antopol Hirsch delves into what went on behind the scenes, painting a picture for all of us of how Andrews dealt with all the chaos.

““Maria’s Mountain” was located outside Salzburg, about ten kilometers into Bavaria. The crew set up camp at an inn at the bottom of the mountain. Their plan was to transport the equipment, cast, and crew up the mountain by Jeep, but the constant rain had washed out the roads. So they were forced to resort to a more old-fashioned method of transportation—the ox cart,” Julia writes.

RELATED: Why Julie Andrews And Christopher Plummer’s Kiss Took Over A Dozen Takes To Film

Director Robert Wise also chimes in, “One of my favorite memories of Julie is when she traveled up that hill in the ox cart with her fur coat wrapped around her against the cold.”

“Filming on the mountain-tops was the hardest,” Andrews herself adds. “We were miles away from any toilets. So when we had to go, we’d just say, ‘I’m going to the woods now.’ Everyone understood what you meant.”

Julia continues, “To film what is one of the most famous openings in movie history, a helicopter swooped down just as Maria rushed up to her beloved mountain. The timing on that shot had to be perfect. So, to make sure Andrews came up the hill at the moment required, Marc Breaux [choreographer] hid in the bushes nearby. As the helicopter ascended, Breaux, using a megaphone, cued Andrews and she rushed up the hill and began singing.”

“The helicopter was a jet helicopter,” Andrews remembers. “The cameraman was strapped onto the side of the helicopter, hanging out so he could get the shot, and he came at me sideways. I’d start from the end of the field, and I’d hear Marc yelling ‘Go!’ from a bullhorn. The helicopter would come at me, clanking away, then it would go around me to get back to the beginning to repeat the scene. But when it circled around me, the downdraft from the jets was so strong that it would literally knock me over. I couldn’t stay up. They had to do this shot about ten times, and finally I got so angry I yelled, ‘That’s enough!’”