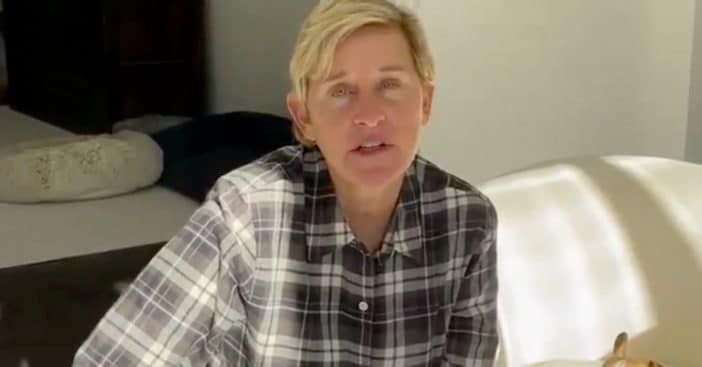 Ellen DeGeneres recently came out with the news that she tested positive for COVID-19 and is now speaking out about the symptoms she’s been experiencing. She shared a video recently, letting her fans know that she’s feeling “100 percent” despite learning that “excruciating back pain” and she’s been dealing with a whole lot of that.

“Hi everybody, just saying thank you to all the well wishes out there. I appreciate it very much,” DeGeneres says in the video. “I am feeling 100 percent. I feel really good. One thing they don’t tell you is you get, somehow, excruciating back pain,” she continued. She added she did not know it was a symptom of the virus. “Who knew? How come? Back pain. Bad.”

She says her ‘excruciating back pain’ is ‘bad’

After she learned she had tested positive for the virus, she released a statement. “Fortunately, I’m feeling fine right now,” she said at the time. “Anyone who has been in close contact with me has been notified, and I am following all proper CDC guidelines.”

RELATED: Ellen DeGeneres Has Tested Positive For The Coronavirus

Starting a new chapter with a bang

During the most recent season premiere of the show, Ellen addressed toxic workplace allegations that surfaced over the summer season. “As you may have heard, this summer there were accusations of a toxic work environment at our show, and then there was an investigation,” she said in her opening monologue of the new season. “I learned that things happened here that never should have happened. I take that very seriously, and I want to say I am so sorry to the people who were affected.”
She added that she is aware of her “position of privilege and power” and hopes to start “a new chapter” for the new season of the show with her 270 employees.
Click for next Article
Previous article: Yukon Cornelius’ Odd Licking Behavior Finally Explained In This Deleted Scene
Next Post: 45-Year-Old Reese Witherspoon Shows Off Flawless Makeup-Free Face In New Video