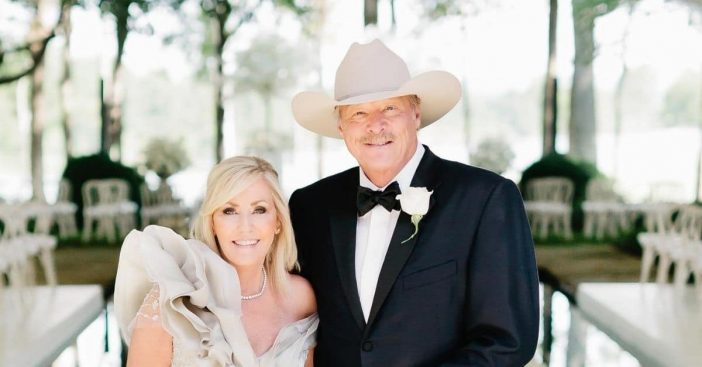 Country singer Alan Jackson recently celebrated his 41st wedding anniversary with his wife Denise. The two were high school sweethearts and wed on December 15, 1979. He was just 21 years old. Their love story hasn’t always been easy though.

In 1998, they separated for a few months because of the strain of Alan’s career and infidelity on his part. They eventually got back together. Denise wrote a tell-all book about their relationship including their separation and recommitment. The book is called It’s All About Him: Finding the Love of My Life and was published in 2007.

Alan Jackson and his wife are celebrating 41 years of marriage

Alan’s Facebook page shared a photo of the couple at what appears to be their recommitment ceremony. The page wrote, “Let’s all wish these Lovebirds a Happy 41st Anniversary!! #LivinOnLove : Kristyn Hogan”

Denise wasn’t the only one to chronicle different parts of their relationship. Alan has written several songs about their marriage and separation including “She Likes It Too” and “Remember When.” In addition, Denise and their daughters have been known to appear in music videos.

Wishing Alan and Denise a very happy anniversary! In conclusion, learn more about Denise Jackson below:

Click for next Article
Previous article: ‘The Little Rascals’: How ‘Our Gang’ Came to Be and Why Those Kids Should Never Be Forgotten
Next Post: A Complete List Of Stores Closing By The End Of 2020