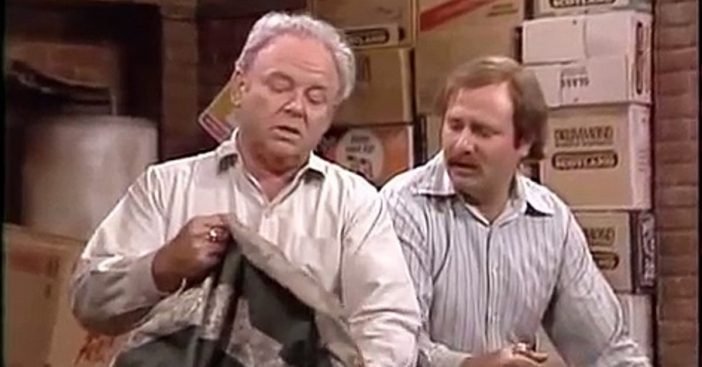 One of the biggest tropes within episodic television — though it isn’t done as much now — is the so-called “bottle show.” Usually devised as a means of saving money, it’s either filled with flashbacks to previous episodes (little new footage has to be shot) or it separates a pair of characters on their own in a confined setting like an elevator or a mine shaft (it happened more than you’d think). The latter would allow for character exploration on a much deeper level than normal and few can match the power of the All in the Family episode “Two’s a Crowd.”

Airing in Season 8, Carroll O’Connor’s Archie Bunker and Rob Reiner’s Mike Stivic are inadvertently locked in the storeroom of the bar which would become the focus of the spinoff series Archie Bunker’s Place. Trapped until morning, they start to drink from supplies down there, get pretty buzzed, and talk. And, boy, do they talk. Well, first they argue, and things get decidedly real.

The most significant part begins with Archie talking about his school nickname, “Shoebootie,” which sprang from the fact that his family was so poor that when one of his shoes broke, his mother gave him a boot to wear so that he had one of each. This leads to him mentioning a black kid who hated him and even beat him up, though he isn’t sure why (not quite grasping that there was something wrong in calling him the “N” word; “What else would I call him?” he asks). From here we are told that racist terms came from his father’s example, to which Mike says that his father was wrong. Well, this really sets Archie off, becoming angrier the more Mike disagrees with him.

Looking into the character of Archie Bunker

RELATED: ‘All in the Family’ Broke Every TV Taboo, Including the First Time a Toilet Was Heard Flushing

“Wrong?” he repeats, softly at first. “Let me tell you something, my old man was never wrong about nothing … Let me tell you something … the father who made you, wrong? Your father, the breadwinner of the house there; the man who goes out and busts his butt to keep a roof over your head, and clothes on your back, wrong? Your father, that’s the man that comes home, bringing you candy. He’s the first guy to throw a baseball to you and take you for walks in the park, holding you by the hand.”

As all this goes on, Mike’s expression gradually changes as he starts to gain some understanding of what made Archie the man he is. Archie continues, “My father held me by the hand … hey, my father had a hand on him … He busted that hand once. He busted it on me, to teach me to do good. My father, he shoved me in a closet for seven hours to teach me to do good. Because he loved me … Let me tell you something. You’re supposed to love your father, because your father loves you. How can any man who loves you, tell you anything that’s wrong?”

Mike is stunned beyond words, as is the viewing audience (though whoever thought a laugh track was needed in this scene couldn’t have been more wrong). Today a sequence like that on a series wouldn’t be that far out of the norm — you can even find similar approaches in a show like Everybody Loves Raymond involving Peter Boyle’s Frank Barone — but back then, it was pretty heavy character stuff.

And it serves as yet another example of why All in the Family is considered as groundbreaking as it is.

Click for next Article
Previous article: Priscilla Presley Sells Sweeping Beverly Hills Estate For for $13 Million
Next Post: 87-Year-Old Sophia Loren Shares Why She Still Feels Like She Is 20 Years Old Inside