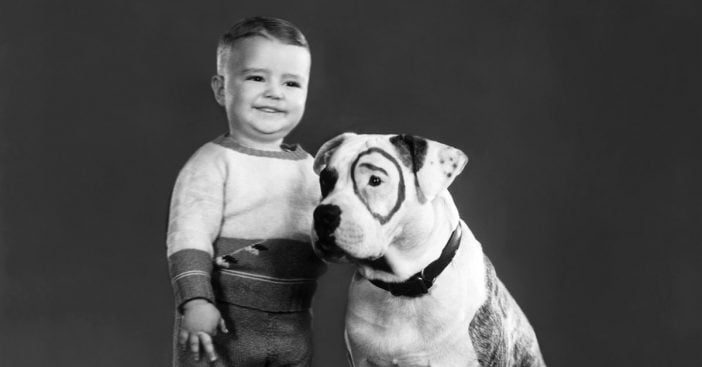 When you think back to The Little Rascals — or Our Gang, if that’s your preference — undoubtedly a favorite character comes to mind, whether it be Spanky, Jackie, Joe Cobb, Alfalfa or any of the others. But beyond the human cast members, who could resist the charm of the kids’ favorite pet, Pete (or, as we prefer, Petey) the Pup, truly a boy or girl’s best friend?

The original Petey, owned and trained by Lieutenant Harry Lucenay, was reportedly born in 1924 and named Pal the Wonder Dog. At about the age of six months, he began appearing in silent short films and already given the name Pete the Pup. It started in Western Vengeance (1924) and continued with Somewhere in Wrong (1925), Yes, yes, Nanette (1925), Dr. Pyckle and Mr. Pryde (1925) and, then, he hit the big time by starring with Harold Lloyd in The Freshman (1925). Then it was 22 films over the next two years playing Tige, buddy to Buster Brown in that then-popular series.

Pal, it should be pointed out, was born with something of a ring around his right eye, but to play Tige, Hollywood make-up artist Max Factor added the finishing touches. That ring was pretty distinctive and certainly, something young audiences delighted in. And it helped the canine to catch the attention of Little Rascals producer Hal Roach, who related to author Leonard Maltin, “The dogs we were using had no personality and couldn’t do enough tricks. We looked at probably 50 dogs and of all the 50 dogs we looked at, the best-trained dog was the bulldog with the ring around his eye. I said, ‘Great, that’s the one we want; all you gotta do now is take the ring off his eye.'”

As it turned out, Max had used a liquid dye on the ring that couldn’t be removed. Roach noted, “So I said, ‘What the hell? Leave it on.'” And at that point, he signed Pal to a three-year contract with a six-month option. Incredibly, his starting salary was $125 a week with gradual increases — which was more than twice as much as the kids were each making.

How did Petey the dog die?

Petey made his first appearance as part of Our Gang in 1929’s Lazy Days and reprised the role in that same year’s “Boxing Gloves” (which said goodbye to Joe Cobb and introduced Nathan “Chubby” Chaney), “Cat, Dog & Co.,” “Bouncing Babies,” “Saturday’s Lesson and “Moan & Groan, Inc.” But then, as it turned out, Pal the Wonder Dog died in 1930, having been poisoned, many believing by someone who was holding a grudge against Harry for some reason or another. But death did not stop Petey from continuing to act — Harry had begun breeding Pal and training his offspring.

The second Petey, who had his ring around the left eye, made his debut in the 1930 short “Pups is Pups.” He appeared in a number of others, his final installment being 1932’s “The Pooch.” At that time, Harry and Hal Roach had a falling out for some reason and the studio’s animal trainer would recruit dogs that looked like Petey for future installments.

Where is Petey the Dog buried?

Harry moved the latest Petey to Atlantic City, where he would be photographed with children at that city’s Steel Pier. Even though the real Petey was gone, the character would certainly live on in additional Our Gang shorts and would be featured in the 1994 film version of The Little Rascals as well.

The duo of Harry and Petey would make their way back to Los Angeles, where Petey participated in promotional events involving the Our Gang cast members. Strangely, Petey would actually outlive Harry, who was shot to death during a card game in 1944 (what is it about people involved with The Little Rascals that so much bad stuff happened?). The canine would live until January 28, 1946, and die of old age at 16 years and 4 months. He is buried at Los Angeles Memorial Park in Calabasas, which is part of Los Angeles. But like those wonderful kid stars, Petey, too, continues to live on in the hearts of fans. Woof.