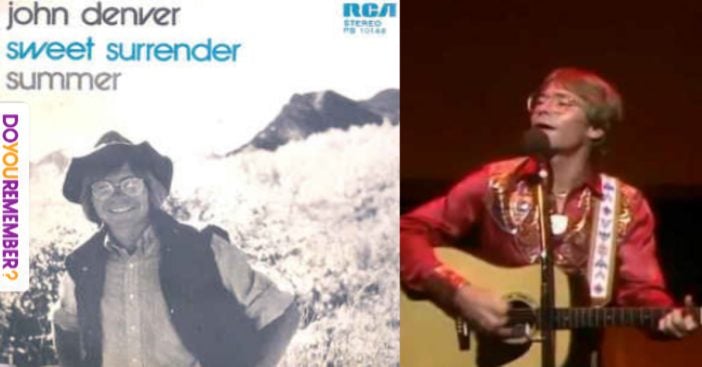 Sweet Surrender is the title of a popular song by the American singer-songwriter John Denver. It was originally recorded for his 1974 album Back Home Again, but was chosen as the lead single from the concert album An Evening with John Denver. “Sweet Surrender” reached #13 on the Billboard Hot 100 chart in February 1975, remaining in the Top 40 for eight weeks. It also rose to #1 on the adult contemporary chart, Denver’s fourth song to reach the top on this survey. Following a theme common to many of Denver’s songs, the lyrics to “Sweet Surrender” deal with a journey of self-exploration tied to themes of nature and environment.

The single version of “Sweet Surrender” has yet to appear on any compact disc or digital reissue, characterized by its lack of applause over the introduction. John Denver’s “Sweet Surrender” was the opening theme song of the 1974 Walt Disney movie The Bears and I. It was covered by the pop/folk band “The Seekers” and appeared on the Australian release of their 1975 self-titled album.

There’s nothin’ behind me and nothin’ that ties me to
Something that might have been true yesterday
Tomorrow is open and right now it seems to be more than enough
To just be here today, and I don’t know

What the future is holdin’ in store
I don’t know where I’m goin’ I’m not sure where I’ve been
There’s a spirit that guides me, a light that shines for me
My life is worth the livin’, I don’t need to see the end

Sweet, sweet surrender, live, live without care
Like a fish in the water, like a bird in the air