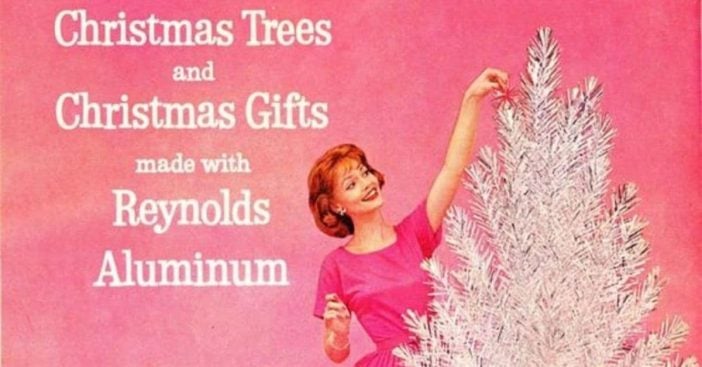 If you think about a tacky and sad-looking Christmas tree, chances are you’ll imagine the Charlie Brown Christmas tree. However, back in the day, aluminum Christmas trees were super popular, even though they’ve definitely become dated and even tacky today.

The publication Jezebel recently interviewed Sarah Archer, author of design history Midcentury Christmas, and they chatted about the history of these aluminum trees and just why they were so popular in 1950s America.

Why were aluminum Christmas trees so popular in the ’50s?

“Fake trees generally actually go pretty far back. What happens in the ‘50s, which is when they really burst onto the scene, aluminum’s abundance was really a byproduct of the war effort. Many of those materials were used or really ramped up—or even invented—for wartime applications. So the aluminum industrial complex, as it were, after the war was like okay, we’re ready,” Sarah says.

RELATED: Do You Remember When MTV Reunited The Monkees For A Christmas Medley In 1986?

She continues, “Alcoa was the biggest manufacturer of aluminum for the war effort and for aluminum products throughout different parts of the 20th century, but they didn’t actually make trees, although the Alcoa brand was used a lot to promote them. Most of them came from this place called the Aluminum Specialty Company, in Manitowac, Wisconsin, and they started to get really popular and they would say, “made with real Alcoa Aluminum.””

It became ‘cool’ to own retro and vintage items later on

Later on, she states, “There was this real effort to glamorize these. You’ll see lots of household ads from the ’50s and ’60s that show an ultra-glam housewife with an aluminum tree and a set of aluminum tumblers and a toaster and a coffeemaker. This was the wonder material of this time period. As far back as the ‘30s it was referred to as poor man’s silver. It was this cheap workaround to look refined and glam at a time when nobody could afford actual silver.”

So, they were popular and modern-looking for the time period; they had this Space Age-y look to them that faded just as fast as they popularized. By the ’70s, they faded out of Christmas style, but soon made a slight comeback through the ’80s and ’90s as people found them to be ‘retro’ and ‘cool’ again. It was starting to become ‘cool’ to own vintage things, and that trend has continued long into the 2000s as well.

“The main plot point is the Christmas musical, but then there’s this sidebar about the tiny sad Christmas tree that is collapsing under the weight of a single ornament, which is the tree that he chooses. And it’s in contrast to this shiny pink metal tree that Lucy thinks is the greatest thing since sliced bread,” Sarah notes.

Did you or your family ever own an aluminum Christmas tree? Do you still own one for the sake of nostalgia?

Click for next Article
Previous article: Priscilla Presley Wasn’t Caught Without Makeup Around Elvis
Next Post: ‘All in the Family’ Put Limits on Sally Struthers’ Career, ‘And I Desperately Wanted to Work’