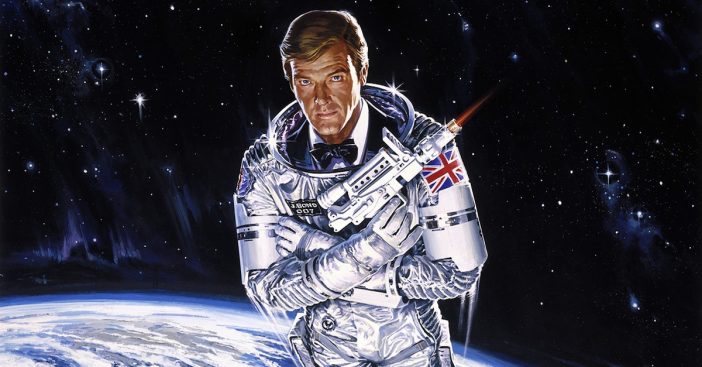 By 1979, Roger Moore — the third actor to portray James Bond following Sean Connery and George Lazenby — had made the part of 007 his own. Things had gotten off to a bit of a rocky start with Live and Let Die (1973) and The Man with the Golden Gun (1974), but by The Spy Who Loved Me (1977) the filmmakers had figured out how to tailor the part to Moore. And that continued in Moonraker, which kicks off in a truly spectacular and, at that time, unprecedented way.

As chronicled in this exclusive excerpt from Nobody Does It Better: The Complete, Uncensored, Unauthorized Oral History of James Bond, one of the highlights of the film is the pre-title sequence in which Bond is thrown out of an airplane by Jaws (Richard Kiel) without a parachute. In response, he has to steal one on the descent by skydiving and wresting it free from one of the villains as they both plummet towards Earth.

JOHN GLEN (director, Moonraker): It was an idea that producer Michael Wilson came up with. He found a lightweight anamorphic lens in Paris and he went to Continental Cameras in the States and asked if they could build a lightweight helmet camera using this lightweight lens, and they did actually build this camera. It weighed seven pounds and it was mounted on top of the skydiver’s helmet. If you put an extension on someone’s neck like that, a seven-pound weight on top of your head, and you pull your parachute, there’s a hell of a jerk and you can imagine what it would do to someone’s neck.

The cameraman devised a system whereby he put a rope around his parachute so that it would open slowly, but when you think that we were filming from about 7,000 feet, he had just seconds to get the people in frame and to do each segment, which we pre-determined. We were a small crew. My first job was to get these guys out of bed. They weren’t disciplined at all in film production. The first morning shooting, I arrived and all the skydivers were all in bed! I said, “What’s going on? We’ve got to start doing five jumps a day.” I sort of had to read them the riot act. They said they had a problem, because the girl cooking breakfast would take till 11:00 a.m. to get everyone fed.

FRED DEKKER (writer/director, The Monster Squad): Shoving somebody out of an airplane and they’re filming it for real is pretty hardcore.

JOHN GLEN:  Almost all the aerial stunts we shot in America, because it was the best place to do flying stuff. It was the cheapest place, and it’s so restricted in Europe and the weather is no good. You’re up against it. So most of our flying stuff we used to do in the Mojave Desert. We rehearsed it on the ground and for just a two-second segment he had just enough time to get it in his frame and give them the thumbs-up, and away they went and did their little segment, which was wrestling the parachute off of him. By that time you’re running out of airspace and the ground is rushing up at an alarming rate, and he had to then open his parachute slowly, so quite often he was quite close to the ground when he actually got down to a controlled descent.

JOHN CORK (author, James Bond: The Legacy): It is a very weird film, but I can tell you this: when audiences saw Bond pushed out of an airplane and then go slicing through the air to take the pilot’s parachute away, it was one of the most amazing bits of cinema ever witnessed by anyone.

JOHN GLEN: We had very cleverly designed parachutes with flat packs, and the wardrobe was specially designed with Velcro sections so that when they’d finished doing their stunt, they would just hand deploy and the chute would come out, having broken the Velcro sections. It got very complex, because when Bond is pushed out of the airplane, he is supposed to be without a parachute, but in fact he has a flat parachute and a reserve, so he had two parachutes. He then swoops down, dives onto a man who’s in free fall, and he has a fight with him and steals his parachute and then puts it on, so he finishes up with three parachutes. The idea is crazy when you think about it, yet he did it.

Then the parachute they were fighting with had a little parachute especially made for it so it could come down to earth, because if it fell on someone’s head from that height, it would kill them. In fact, one day he dropped it during the fight and it came down like a rocket. It was a crazy way to work. We only had one, and I never thought we’d lose it, so off we went on a huge search party looking for this parachute.

It was an interesting exercise, I must say, and being a film editor, I cut the thing progressively as I went along. I storyboarded it all and as we did each segment; I would do seven segments each day. I would have them delivered back to the air field the following morning, and I would look at them, and if we needed to redo anything, which we often did, I would just recycle it into the program and cut the stuff together as I went along. Of course, the boys would get very enthusiastic when they could see it was actually working. It was a little over three weeks there filming those bits and pieces. It was probably a hundred and something jumps, since you could only do two seconds at a time. They tried to get me to jump out of the airplane. I wouldn’t have any of that. But it was worth all the effort.

Check out our favorite Bond Films of all-time…

Click for next Article
Previous article: Art Carney’s Personal Struggles Cost Him a Lot, Including a Norton Spinoff from ‘The Honeymooners’
Next Post: Can You Nail This Trivia About Your Favorite Disco Movie ‘Saturday Night Fever’?