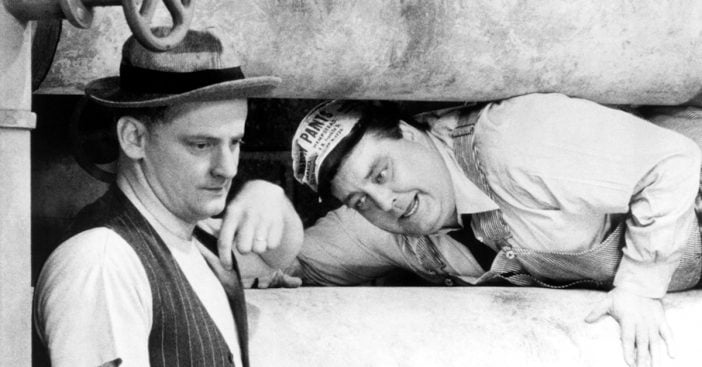 Few may realize how extensive a career Art Carney had or the range of performances he gave that went far beyond his portrayal of Ed Norton, sidekick to Jackie Gleason’s Ralph Kramden on The Honeymooners. Even less may be aware of the fact that throughout his life and career he waged an ongoing battle with alcoholism and mental illness that cost him a lot — including a Norton spinoff series.

Geoffrey Mark, pop culture historian and author of The Lucy Book, offers, “Mental illness would plague Art his entire life. I’m sure today there would be alternate medications and diagnoses for him. He was called schizophrenic and manic depressive, resulting in a time when he simply could not function. There were also multiple stays in mental institutions trying to get through to him to function. So while his star is ascending — while he’s literally becoming a star — he is struggling mightily with mental illness.”

Art Carney: A Biography author Michael Seth Starr points out that alcoholism actually ran in his family, which he feels shouldn’t be surprising when considering that the actor had had a difficult youth. The drinking really started getting out of hand, though, when he toured with big band leader Horace Heidt in 1936. “It started then,” he explains, “where Art was already belting back a few for breakfast. What’s impressive, though, is that he managed to carve out such an unbelievable career for himself with all these demons. There was no rehab back then, so he would stay at a sanitarium in Connecticut. There was no Betty Ford Clinic. You have to wonder how he and others like him — who were pill-popping and drinking — would have fared in their careers if it had been recognized for what it was and would have been sent to rehab.”

The Road to ‘The Honeymooners’

Art was born on November 4, 1918. He was drafted into the United States Army for World War II, sent home following an injury to his leg that gave him a life-long limp. Returning to America, he launched his career in radio, performing as a comic singer as part of Horace’s show and doing amazing impersonations of then-famous people. He appeared on other radio shows, including The Morey Amsterdam Show, which he followed to the television version that ran from 1948 to 1950. Proving himself comically brilliant, he appeared on Cavalcade of Stars which was starring Gleason at the time. Eventually, this led to him portraying Brooklyn, New York sewer worker Ed Norton on The Honeymooners, which, of course, became its own bit of legendary Classic TV he would reprise many times over the years.

Peter Crescenti, co-author of The Official Honeymooners Treasury, comments, “A lot of actors and actresses that are put together are OK, but Art Carney and Jackie Gleason were magic on TV. In music, The Beatles were magic. But you look at any of those magic moments in entertainment history and I think Art and Jackie had this magical relationship on stage that is unmatched. They were like two facets of one person; so tight and cohesive.”

There Was Almost a Norton Spinoff

Through it all, Art appeared on a variety of different television series (among them playing an alcoholic Santa Claus on an episode of The Twilight Zone), but always gnawing at him in the background was the alcoholism and depression. It was a combination of the two that prevented a Norton spinoff series.

Michael explains that Gleason decided at one point that Art should star in his own show, and a pilot was put together which focused on Norton and his co-workers in the sewer — including Car 54, Where Are You? and The Munsters star Al Lewis. “But Art was drunk during the filming,” he says. “He was dropping his script and blowing his lines and it was one of the few times he actually let his guard down. Al Lewis said that Art was such a professional that he must have been in deep pain to allow himself to show up to work drunk. Al also suggested that Art sabotaged his chance, because he didn’t want to be the star of a show. He went along with the plan to do the spinoff, but drinking heavily during the shooting of that pilot, if you want to look at it from a psychological angle, is psychological.”

A great new opportunity arose for Art in the 1960s when Neil Simon cast him as the first Felix Unger in the Broadway production of The Odd Couple, playing opposite Walter Matthau’s Oscar Madison. As was the case with Gleason, it was comic gold combining them, but it wasn’t to last.

“Art couldn’t handle the success emotionally,” details Geoffrey. “He couldn’t handle eight shows a week physically. He had a nervous breakdown and had to be hospitalized in Connecticut. It’s one of the reasons why he did not appear in the movie version.”

He would be replaced by Eddie Bracken and, in the 1968 feature film adaptation, Felix was played by Jack Lemmon. For his part, when Art was feeling okay again, he went back to the safety net of Gleason and The Jackie Gleason Show, where he once again played Norton in color and musical segments of The Honeymooners. It wasn’t long, however, before he had yet another breakdown.

Suggests Geoffrey, “I would imagine if one is not in the public eye, dealing with these things is easier, right? But if one’s function is to stand in front of a thousand people and learn new scripts and learn songs and choreography and be funny, that’s a lot of pressure. On the other hand, if you’re born with incredible talent, not using that talent turns to depression. So it’s like damned if you do, damned if you don’t. And that, of course, explains why he didn’t retire, because retirement in itself would have brought on more mental health issues and financial issues. Until recently there was no such thing as medical coverage or health insurance for mental illness. Back then, it just didn’t exist. So you did what you could.”

What happened to Art Carney?

The Jackie Gleason Show ended its run in 1970 and, with the exception of a few Honeymooners specials, Art pretty much left Ed Norton behind and started focusing on making movies. Amazingly, in 1974 he won the Academy Award for Best Actor for his portrayal of an elderly man named Harry, accompanied by Tonto, his pet cat, on a cross-country trip that follows his apartment building being torn down.

Michael points out that people think of Art as Ed Norton in pretty much the same way they think of William Shatner as Captain Kirk, but Art proved himself to be an exceptional dramatic actor over the years. “For a man who had no classic training,” he states, “and I don’t mean Shakespeare, just that he never took an acting class, he was amazing. He was basically a mimic early in his career and an announcer, but he was able to plumb the depths of his acting talent and really come out with some gems. When he beat Al Pacino and Jack Nicholson at the Oscars, Hollywood was stunned. They gave it to him, because they recognized the talent that was there and it was a good comeback story at the time. He had been through a lot and would continue to go through a lot after that, but he managed to sort of raise himself up from the depths of alcoholism and depression and claw his way back into the business and show off his talent. And he won the Oscar for it.”

How old was Art Carney when he died?

He continued appearing on TV specials and in movies (including the 1985 TV movie Izzy and Moe, which saw him re-teaming with Gleason), his last effort being Arnold Schwarzenegger’s 1993 adventure The Last Action Hero. He was married three times (twice to the same woman) and had three children. He died of natural causes on November 9, 2003, at age 85.

Reflects Michael, “Art’s legacy is he helped the TV medium establish itself. A lot of comedians and performers owe a debt to him and the way he performed in terms of movements on stage and dramatic chops. I also think he’s an under-appreciated performer in the pantheon of show business. Obviously, he had great writers on The Honeymooners and elsewhere, but you can only do so much with the printed word. You have to inject a big part of yourself into whatever role you’re taking on, and Art was the master of that.”

Geoffrey closes with the thought that winning the Academy Award turned him into a movie actor and that at the time that things slowed down, Gleason decided to make Honeymooners specials. “Like his own mental illness, the heat of his career kept coming and going,” he says. “There were periods when he was the hottest thing around, even as an old man, and periods where pretty much he was working with Jackie Gleason and there wasn’t much else to do.

“But,” he adds, “the man had an enormously long career with an amazing talent. One of the questions you ask is, imagine if he didn’t have mental illness how big his career could have been.”

Check out 12 Examples of The Flintstones ‘borrowing’ from The Honeymooners:

Click for next Article
Previous article: Reports Show Sean Connery’s Cause Of Death At Age 90
Next Post: EXCLUSIVE: Return to 1979’s ‘Moonraker’ and One of the Greatest James Bond Stunts — Ever!