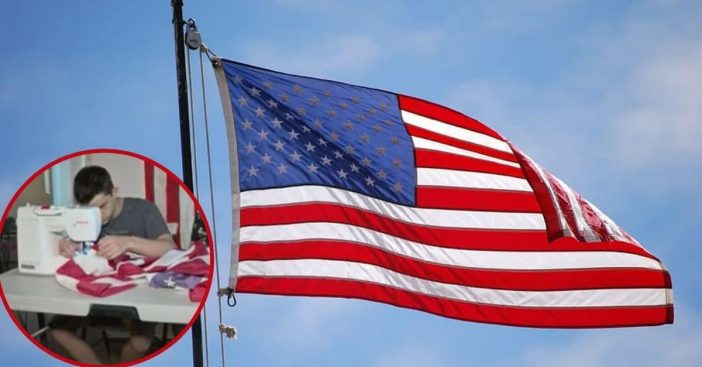 One Florida teen went out of his way to ensure American flags are hung properly and proudly for local businesses. He actually made it his personal mission to ensure every American flag is raised up on a flagpole after being fixed. Matthew Amatulli, who is 16, started fixing flags with a sewing machine when he was a young boy. He learned how to sew from his grandmother.

Amatulli is autistic and his mother has said that the movement of the flag has always helped to calm him down. Now, he takes old, worn down flags and sews them back together, then hangs them up to proudly sway in the breeze.

“If there is a business that has a pole without a flag on it, and it is working, then he will ask if he can put his flag up there,” says his mother Angela, according to Fox News. “I keep telling him he needs to start his business soon because I can’t afford to keep buying all of these parts.”

RELATED: FedEx Driver Stops On His Route To Pick Up And Fold American Flag

His mother stresses that he cares about the flag so much that they both drove down State Route 7 and took down the flags before Tropical Storm Eta made landfall in the U.S. However, there are certainly times when a flag is beyond saving and cannot be repaired. At that point, Amatulli makes sure to retire the flag properly as well.

“He is a very old soul and he just loves the American flag,” his mother states. “Not many children do, not even adults think twice.”