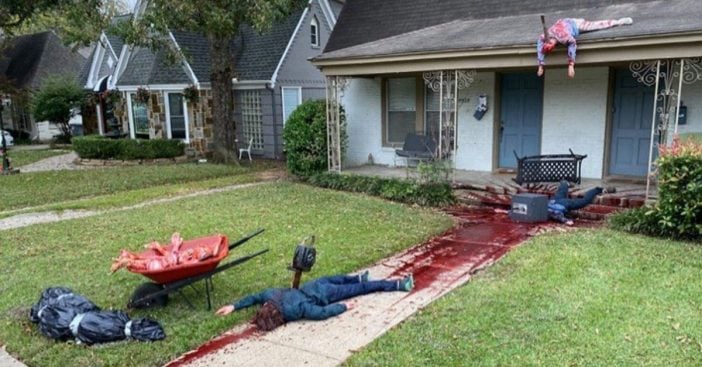 A Dallas, Texas homeowner got a wake-up call (literally) from police after neighbors complained about the home’s Halloween decor. It looks so much like a crime scene that neighbors were disturbed and complained to the police. Steven Novak is an artist in East Dallas and admits that he’s very passionate about Halloween.

“I’ve always been up to hijinks like flying ghosts or 7-foot tall snow sculptures of myself, so if I was gonna do Halloween, it was obvious that it should be hyperreal,” he says, according to the Dallas Observer. “No lights or fog machine … something that would really freak people out walking by in the dark. So I whipped up some dummies and slung 20 gallons of blood all over.”

This gory Halloween decor earns the award for most people disturbed!

Now THAT is how you do Halloween right. This guy got the cops called on him several times in Dallas.

Nope, Steven is not about spiders, tombstones, jack-o-lanterns, or fake zombie dummies. He’s about the real-life thing, and it may not be for the faint of heart. There are dummies laying out on the sidewalk, blood leaking from their bodies as they lay with a knife in their backs. There’s also what looks to be a bucket full of fake, bloody skulls.

RELATED: This Halloween, Beware The Candy Man, The Real Stuff Of Nightmares Who Haunts This Photo

“I’m most proud of the wheelbarrow tipped over by the street full of Hefty bags, looking like a failed attempt to dispose of the dismembered bodies in the middle of the night,” Novak notes. “A kid walked by and asked me what happened to them; I said they ate too many Skittles.”

Tending to the bodies

Although it looks very realistic and horror-like, the fake blood doesn’t cooperate when there’s rain. Because of this, Steven has to go and literally ‘water’ the fake bodies with fresh fake blood every morning because the blood from before would wash away due to rain. This definitely doesn’t sit well with the early-morning dog-walkers and joggers.

“Neighbors told me cop cars were in front of my house a lot during the day,” he says. “I was only home twice to receive them. They told me they thought it was cool and that they were only there because they were required to reply to complaints from the sergeant.”

Steven continues with a laugh, “They were in formation at the door and when I opened it they asked me if it was all mine. I asked, ‘You mean the blood and the bodies?’ Yeah, that’s me.” Steven tells the Dallas Observer that “I think I could’ve used more.” Maybe next year! Gory Halloween decor 1, everyone else, 0.