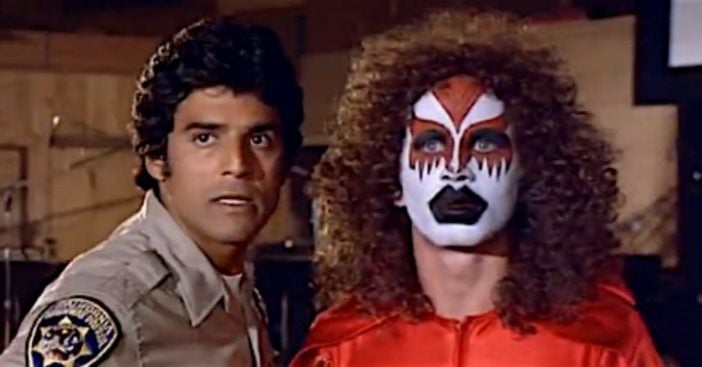 Many CHiPs fans love the Halloween episode from 1982. The episode, titled “Rock Devil Rock,” follows guest star Don Most who plays Moloch, a character inspired by Gene Simmons of Kiss. It was directed by John Astin, who played Gomez Addams in The Addams Family.

In the episode, Moloch is wearing Kiss inspired makeup and outfit and is performing at a concert. He sings lyrics about the devil which turns out to be a big mistake! Ponch and Bobby are security guards and escort Moloch to his car at the end of the show. His car begins to play a tape that says, “Moloch must die” and spins out of control.

There is another famous face you might recognize in this episode! Elvira (Cassandra Peterson) appears in the episode too. Watch a clip from the episode below, just in time for Halloween:

Click for next Article
Previous article: Brooke Shields Says Her Teenage Daughters Have Helped Her Build Confidence
Next Post: LISTEN: Judy Norton Of ‘The Waltons’ Is Actually A Very Gifted Singer Outside Of Acting