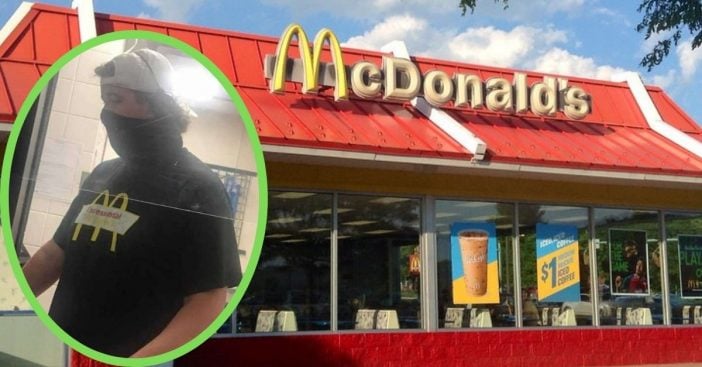 Last month, Ohio mother Brittany Reed took to the “Let’s talk Waynesville, Ohio” Facebook page to discuss her experience at one McDonald’s chain. The mother had left football practice with her three children when her 4-year-old son and 7-year-old daughter began crying. This was due to the fact that they were unhappy that their mother was planning on serving red potatoes for dinner, so she decided to change things up and head to McDonald’s instead.

However, Reed left her purse at home. She realized that after she already placed the order. “Welp now I wanted to cry,” she writes in the post. “I look at the young man [the cashier] with tears in my eyes just from being stressed and annoyed and say ‘hun I am so sorry but I have to cancel that order I left my purse at home when we went to football tonight.’ WITHOUT HESITATION he takes out his wallet and swipes his card before I could even say ‘no I will be right back!’”

Reed told the cashier, identified as Wyatt Jones, that she would be back to pay him for taking care of their meal. However, Jones said not to worry about it. “I just want his parents to know how KIND & COMPASSIONATE your son was tonight!” Reed says on Facebook. “He made this stressed out momma pause for a moment and realize this is exactly what we parents are trying to do, raise great humans. Well Wyatt sir, you are an amazing human!!!”

Reed has interviewed with In The Know following the kind experience, discussing more in detail. “With the emotions of the moment, I just about cried, to be honest, but Wyatt was so incredibly kind. He didn’t skip a beat at all. He pulled his wallet out like [it was] no big deal.”

Brittany had no idea that her experience would go viral

Reed writes on Facebook that she was eventually able to convince Jones to let her pay him back. It took a little bit of pushing, though. She learned that Jones was saving up to buy a car and so Reed decided to create a GoFundMe for him. As of October 7th, she managed to raise $35,000 from more than 2,000 donors. “I was able to connect with his mom and made sure they were okay that we were going to start a GoFundMe,” Reed says to In The Know. “She said she was okay with it and did let Wyatt know, and he was so shocked.”

Reed adds that she planned to surprise him with this during a McDonald’s ceremony honoring him for his kind gesture. Reed also admits how overwhelmed she is by all the positive support. “I honestly didn’t expect this to travel like it has at all!” she writes. “I honestly posted in our local [community’s] ‘Let’s Talk’ page because I was hoping it got to his parents so that they could hear how awesome their kiddo was because, at the end of the day, that’s all we truly want as parents: to raise good humans.”