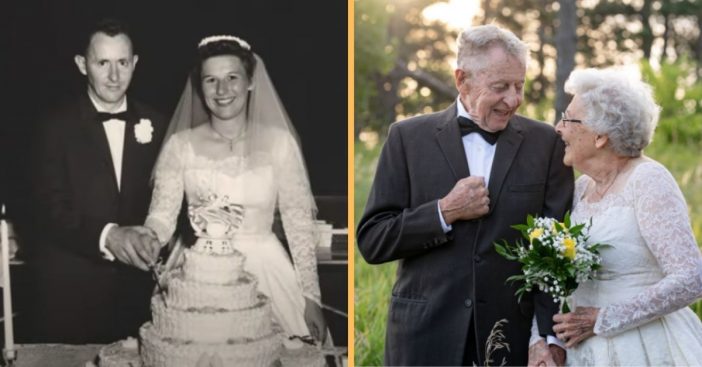 Lucille and Marvin Stone of Kearney, Nebraska got hitched on August 21, 1960, and Lucille wanted to do something special for this anniversary. She contacted photographer Katie Autry and asked if she could photograph she and her husband in their original wedding attire. “I said, ‘You still have it? And you can wear it? Oh my gosh Lucille, I think that’s an amazing idea,'” Autry tells Good Morning America.

The photos were shared on Facebook and have since been adored by thousands of people online. “I think so many people saw their story and it was just a breath of fresh air.” Autry has taken photos of one of the Stones’ three children before and says that the couple wore their original wedding attire for their 25th-anniversary photos as well.

“I had the pleasure of working with Marvin and Lucille to celebrate their 60th wedding anniversary. This may be one of my favorite sessions to date

! These two lovebirds even wore their original wedding attire for the session (Lucille made her dress)!” Autry writes on her Facebook post, sharing the photos.

“When I asked them both what their secret to a lasting marriage was they had the following advice.

1. Work hard
2. Be kind to one another
3. Think before you speak
4. Rely on each other’s strengths to overcome your weakness
5. Stay strong in your faith”
“What an amazing example these two are of true love standing the test of time. I am so glad to have met them, and honored to have captured these memories for them. Happy Anniversary Marvin and Lucille!! Cheers.”

The couple first met when they were teaching at the same school. “They’re very humble and they just can’t believe that many people would be interested in them,” Autry says of the two. “Being in their space, you could see how much they care about each other and that’s a rare thing to find.” What a sweet couple! Happy Anniversary!