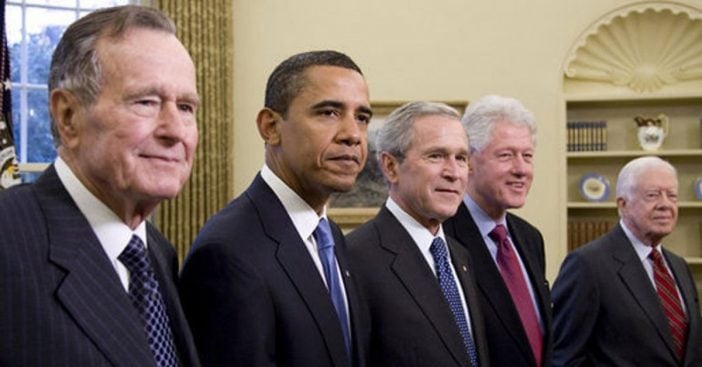 Have you ever wondered what the life of a former president is like? Many of them stay in the public eye and are seen out and about. You may have wondered what kind of benefits they get, what their daily life is like, and what kind of rules they may still have to follow.

For starters, they get a lifelong pension of around $210,700 per year which means they never have to work again if they don’t want to. However, if they are impeached, they lose the rights to that pension. If they do choose to make more money, they often write a book or memoir and can make millions.

Former presidents get a lifelong pension and protection

They also receive Secret Service protection for life. They get a little more protection than their spouses and children. Since they are always protected, they are not allowed to drive. You would think that a former president might be able to take their car for a spin, but it is not allowed.

In addition to a pension and lifelong protection, they still get an office space and staff. Interestingly enough, they may not be offered health benefits. To get government health benefits, they must work for the government for at least five years. For presidents who only serve one term, they are not eligible and must get their own health insurance.

They also get a travel budget

Another perk of being a former president? They get a budget of $1 million in security and travel expenses every year. However, they must use their travel budget for official duties and not just a fun vacation. Many times former presidents become friends with current presidents so they might travel together.

While many former presidents write books and give speeches, others dedicate the rest of their lives to philanthropic work. Jimmy Carter in particular has done a lot of charity work, specifically with Habitat for Humanity. He won the Nobel Peace Prize in 2002.

Click for next Article
Previous article: This Is Why Elvis Presley ‘Demanded’ That Ann-Margret Was Signed By His Manager
Next Post: John Travolta Honors Late Wife Kelly Preston On What Would’ve Been Her 59th Birthday