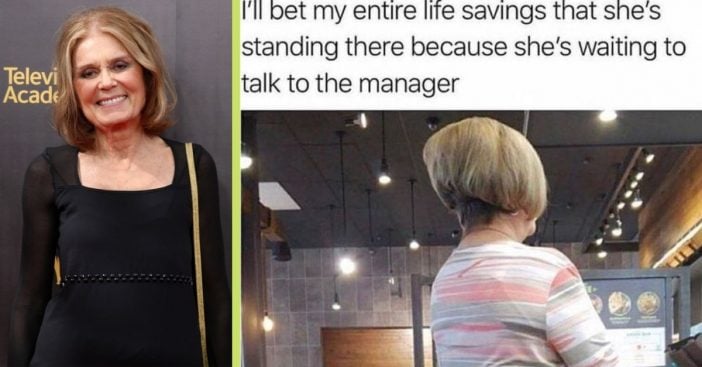 You’ve definitely heard the deal about the ‘Karen’ meme. To be called a ‘Karen’ basically means you’re overbearing, entitled, and sometimes downright crazy. This name has come up a lot in situations like Central Park Karen, Kroger Karen, St. Louis Karen, and Permit Karen. All of these women were then mocked online for their behavior thereafter. Most ‘Karens’ are usually depicted as a middle-aged white woman with a “can I speak to your manager?” haircut.

Feminist icon Gloria Steinem has weighed in on the term ‘Karen,’ even calling it sexist. “There’s always been about half of white women who are economically dependent … on their husbands and are voting their husbands’ interests, not their interests,” Steinem says to Yahoo Entertainment. “And, of course, they also have [their own] racial bias.”

Is the Karen meme sexist?

Both Steinhem and her director of the new film The Glorias, Julie Taymor, believe sexism is what is really fueling the ‘Karen’ meme. “It’s kind of annoying that white women get Karen’d,” Steinem says. “What about their husbands?” Taymor asks. “I find it really annoying that it all gets put on the white woman because of one or two or three incidents … they show. I definitely think the Karen thing is sexist — to make a big deal out of it is an easy thing to do.”

The new film explores the relationship between white women and women of color, depicting some of the racial and class fault lines that we saw back in the 1970s feminist movement. “The thing this film shows is women of color were always at the forefront of the feminist movement,” says Taymor. “That is really critical because there’s been misunderstanding there. And Gloria, from a child onward, was always crossing racial and cultural lines.”

Sexism, racism, and their notable connection

Julianne Moore is one of the few Oscar-winning actresses who portray Steinem in the movie in various parts of her life. Moore sees the film’s past reflected in the present, explaining why it’s so important to dismantle any sexist (or racist) ideologies, like a ‘Karen.’ “One of the things Gloria always says that she learned from Flo Kennedy is that racism and sexism [were linked] — you couldn’t dismantle one without dismantling the other. Hierarchical systems are damaging for all of us, and that’s what these movements were about. We’re seeing that obviously echoed today … it’s our responsibility as human beings to make things fair and give everyone the same opportunity and dismantle the system that’s harming people.”