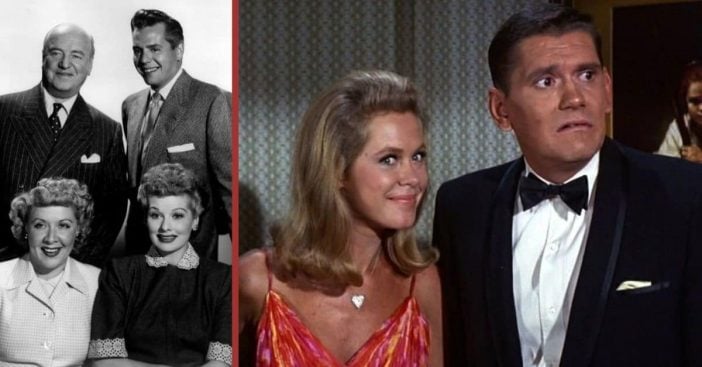 It’s no secret that I Love Lucy was an absolute smashing success and would later pave the way for other women-led shows. It was groundbreaking during that time, breaking barriers for women in entertainment. So, due to its success in a variety of ways, it’s also no surprise that other shows would try to take inspiration from I Love Lucy.

Bewitched is a show that took inspiration from I Love Lucy, maybe a little too literally. In fact, one of the show’s producers, William Asher, stole specific plotlines from the show to adapt to their own storyline.

‘Bewitched’ stole and refused plotlines from ‘I Love Lucy.’ Here are some examples…

Similar to I Love Lucy, Bewitched had a female lead (in this case Elizabeth Montgomery), a housewife and her husband working through the adventures of life together. Of course, the main difference was that the female lead was a witch, adding a flare of fantasy to the show’s storylines. With the help of William Asher, the show was able to become one of the top-rated shows on television at that time, and it’s no mystery why now.

One of the most direct duplicates of an I Love Lucy storyline shows Bewitched characters Serena and Uncle Arthur (Paul Lynde) going to work at a candy factory. They cannot keep up with the conveyor belt that dips the bananas in chocolate and nuts. Sound familiar? That’s because an almost exact scene took place in I Love Lucy.

They also copied their own material!

Lucy and Ethel get extremely overwhelmed keeping up with the moving conveyer belt producing mass amounts of chocolate. Back then, it seemed that fans may have noticed but not cared as much. Today, a lot of fans will notice it and chalk it up to a complete and blatant rip-off of another show. This is obviously very looked down-upon today.

Not only did Bewitched display copycat episodes of other series, but they also copied their own content! Their finale episode “The Truth, Nothing but the Truth, So Help Me Sam,” was actually a direct copy of their episode “Speak the Truth.” Could they have gotten away with this today?

Click for next Article
Previous article: What Happened In The Year 1978?
Next Post: Goldie Hawn Worries She May Never Work Again