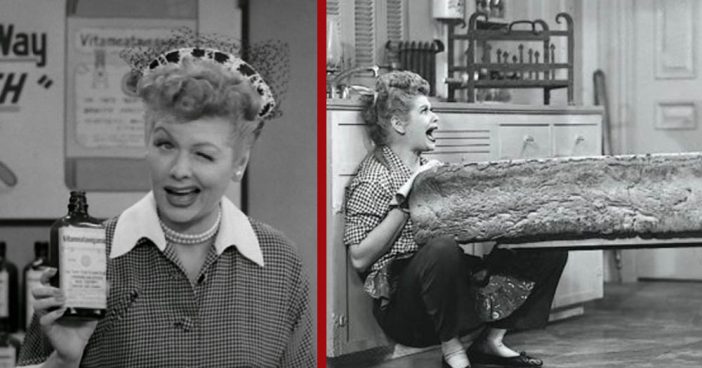 You’ve got some ‘splaining to do! It’s National I Love Lucy Day, commemorating the 66th anniversary (October 15, 1951) of the sitcom’s premiere date. Starring Lucille Ball, Desi Arnaz, Vivian Vance and William Frawley, the show (which remained the most watched show in the country for four of its six seasons) followed the antics of Lucy Ricardo, her best friend Ethel and their husbands Ricky and Fred. The show remains one of the most beloved of all time and spawned some memorable moments. Here are seven of our favorites.

Lucy’s Harpo Marx impersonation is interrupted by the real pantomime walking through the door—and the two famously act out a hilarious mirror skit.

Always seeking the spotlight, Lucy tries to sing along with a barbershop quartet. They try to silence her, but she gets the last word.

In one of the show’s most touching moments, Lucy reveals to Ricky that she’s pregnant while he’s on stage at the Tropicana. In return, he serenades her with a rendition of “We’re Having a Baby.”

Trying to throw Ricky Jr. the ultimate birthday party, Lucy tries to hire Superman to make an appearance. He can’t, so Lucy dresses up as the hero instead—but gets stuck outside the window on a ledge.

This is two parts of two different episodes. In the first one, Lucy dips a dill pickle into a papaya milkshake, in the second, she pours sardines and hot fudge on pistachio ice cream. I do NOT own any of the rights to this video.