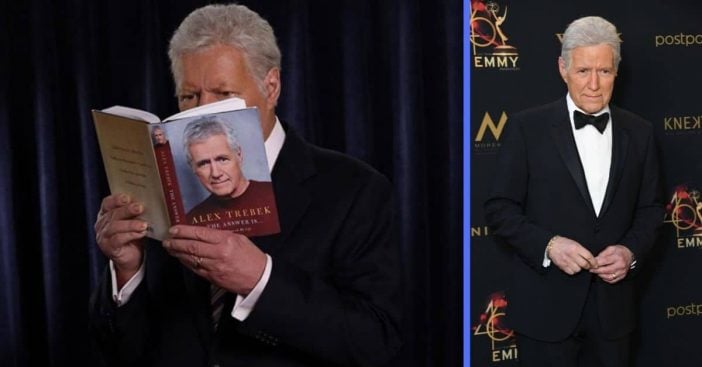 The Answer is … Reflections on My Life is the most recent memoir from 80-year-old Jeopardy! host Alex Trebek. He gets very deep into his personal life in the memoir, talking about his political views, swearing, and how his battle with pancreatic cancer has changed him. Aside from that, he also talks about the time he served in the military, how he’s never late to anything, and how he was already wearing a hairpiece prior to his cancer treatments!

In regards to politics, the Jeopardy! host says he tries to stay away from getting involved in that. However, in his memoir, he reveals that he is a registered Independent. “I vote for the person I feel is best suited to deal with the problems at the time. Modern politics pits us against one another. It forces us to choose a side and has convinced us that our side is right and the other side is wrong. … There is no room for compromise. That’s unfortunate. Because most of the great accomplishments of the world have not been made by people who were certain.”

Alex Trebek gets real about his personal life in new memoir

Fans would never guess that someone as wholesome and kindhearted as Trebek would swear like a sailor. Well, it’s true, and he dives into why he swears in his memoir. He talks about how when he entered the world of broadcasting, he didn’t drink, smoke, or do drugs.

“I needed a vice,” he says. “And so I decided to add more salt to my language. … But it didn’t help me become one of the guys. It just made me look like a jerk. My bad.” Trebek adds that he doesn’t swear as much now as he did in his earlier days.

Trebek was diagnosed with stage four pancreatic cancer in March 2019. Since then, he has spoken very openly about how he’s been feeling during the entire process. He reveals that he has often thought of Jeopardy! contestant Cindy Stowell, who had stage 4 colon cancer during her six-game run on the show in 2016. She died shortly before her games aired.

“I admire how she didn’t want to make a big deal about her illness,” Trebek says in his memoir. “And how she didn’t let it keep her from achieving her dreams.” He also says that sometimes he regrets going public with his diagnosis because people often look to him for reassurance and strength. “The longer I’ve lived with the cancer, the more my definition of toughness has changed. I used to think not crying meant you were tough. Now I think crying means you’re tough. It means you’re strong enough to be honest and vulnerable. It means you’re not pretending.”

Trebek continues to be optimistic about it all. He has already outlived the one-year survival rate for pancreatic cancer patients, which is a grim 20%. To read into Alex Trebek’s amazing life, click here to purchase his new memoir.

Here at DoYouRemember? we want to ensure our readers receive the best content and products. If you make a purchase through one of our links, we may earn an affiliate commission.

Click for next Article
Previous article: Bob Saget Chimes In When Fans Call Candace Cameron Bure’s Photo ‘Inappropriate’
Next Post: Melissa Etheridge Opens Up About Coping With The Death Of Her Son