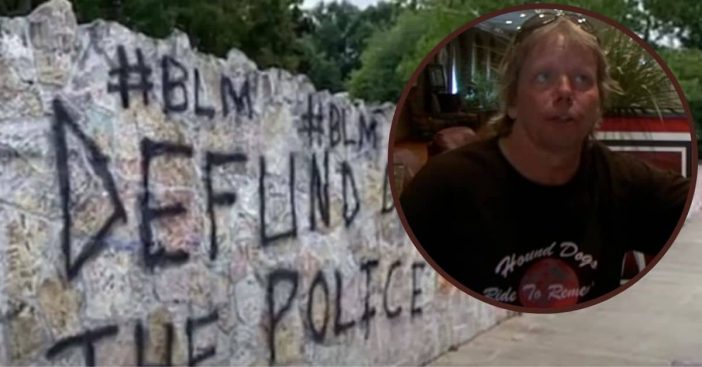 Elvis Presley’s step-brother, Bill Stanley, has expressed his complete shock over the graffiti placed on Graceland property earlier this week. The black and orange lettering had protest slogans such as “Black Lives Matter”, “Defund MPD” [Memphis Police Department], and “Abolish ICE” written on the walls. The walls actually had fan messages carved into them prior to the graffiti being sprayed on over it.

“This is totally uncalled for,” Stanley says, according to WMC5. “One of the saddest days of my life. I mean, besides the day that Elvis passed away, this right here is right up next to it.”

Stanley’s mother was actually Elvis’ step-mother Davada “Dee” Stanley. She married his father Vernon Presley in 1960. Dee was Vernon’s second wife after his first wife, Gladys, died in 1958. Priscilla Presley also expressed her shock towards the graffiti in a series of tweets recently. “Concerning the graffiti at Graceland, I’m absolutely horrified that those in our own city disgraced the walls surrounding Graceland.”

“I’m saddened by acts like this and appalled by this behavior,” she continues. “We were able to clean all the graffiti off thanks to our dedicated crew.”

The official Instagram account for Graceland did not comment on the situation, but they did post a photo of their walls. “We look forward to seeing all of the Elvis fans here during the holiday weekend!” the caption read. However, a fan did comment, “Nothing in the news offended me as much as the desecration of the Kings home. This is war.”

Another writes, “I sure hope all that crap is cleaned up!! How dare they attack Graceland!!”