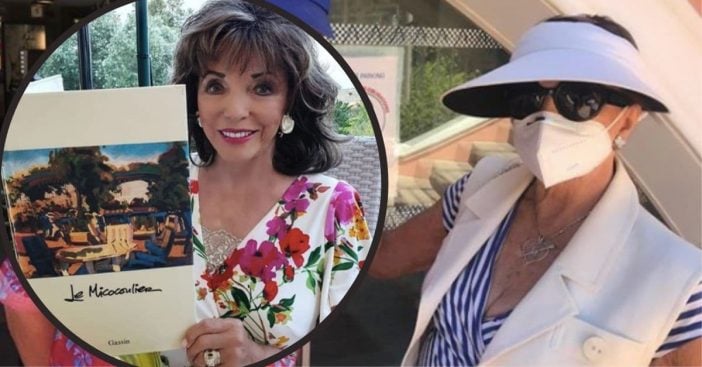 Dynasty star Joan Collins claims she clashed with police over wearing the wrong face mask. At the time, she was vacationing in the South of France. The 87-year-old claims she was yelled at in Ikea. This was because of her switching out her normal face mask for a clear face visor. This is now illegal under a new law put in place just last month.

She was in St. Tropez with Piers Morgan and Julian Clary when visiting the Home Goods store. Collins claims that she was “pounced” on. “An officious gendarme became deeply offended by it, and while I was mulling over the benefits of Ikea’s gravadlax vs its smoked salmon, he pounced,” she writes in the Spectator.

“Gesticulating in Gallic fashion, he yelled at me to put on a proper mask, because visors aren’t legal. Chastised, I slunk away, muttering an Anglo-Saxon expletive under my breath, which, as he glared at me, I feared he might have understood,” she continues.

RELATED: This IKEA Opens Their Doors To Keep Dogs From Sleeping In The Cold

“I then tried wearing a clear plastic facemask, of the sort which all the staff at the Byblos were wearing, but although it was easier to speak and to be understood, it forced my face into a hideous rictus.”

She also claims ageism during the pandemic

The actress also voiced her disdain for how the government is treating senior citizens during the pandemic. “I’ve always thought Western society was terribly ageist, and I don’t just mean showbiz folk but across the board,” she says.

Collins concludes,  “That was utter discrimination against the hardy individuals who have no health issues. But more harmful was bolstering the existing belief among the general public that the old should keep out of everyone’s way.” A rep for Collins did not respond to Fox News for comment.

Click for next Article
Previous article: Lou Ferrigno Has An Opinion On Law Enforcement And COVID-19 Times
Next Post: Whatever Happened To Roy Scheider From ‘Jaws?’