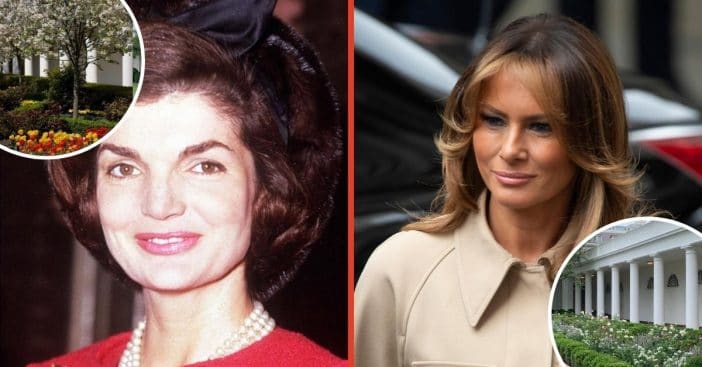 First lady Melania Trump recently did some renovations of the White House gardens. She renovated the Rose Garden that Jackie Kennedy helped design when she was in the White House. Many social media users were not too happy about the changes when they saw photos.

The Rose Garden was first commissioned in the early 1960s. Jackie Kennedy oversaw the construction. There were trees and lots of colorful flowers. After Melania’s renovation, the trees have been cut down and there are mainly white flowers.

Can we talk about how Jackie Kennedy’s Rose Garden was colorful and diverse and beautiful and Melania just made it… white? pic.twitter.com/6jIendxup9

One Twitter user said, “Can we talk about how Jackie Kennedy’s Rose Garden was colorful and diverse and beautiful and Melania just made it… white?” Another remarked, “Melania tearing out Jackie Kennedy’s trees and building tennis courts.”

Other social media users were upset that the White House chose this time to renovate a flower garden when millions of people are struggling to get by during the coronavirus pandemic. However, the White House has revealed that private donors funded the project and taxpayer money was not used.

Others hoped that one day the garden would be returned to the way it was. What do you think about the renovations?