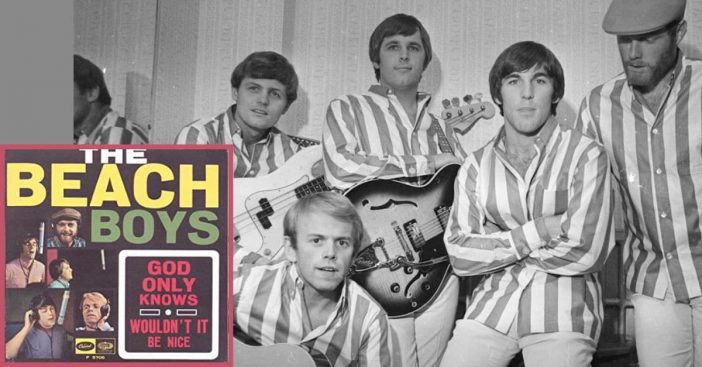 “God Only Knows” is a song by The Beach Boys in May 1966 on the group’s album Pet Sounds. The song was interesting in that most pop songs during that time period never had the word ‘God’ or references to any religion/higher power in the title. Brian Wilson and Tony Asher wrote the song together. Wilson said that he and Asher’s intentions for the song was to create the feeling of “being blind but in being blind, you can see more.”

The song was voted 25th in Rolling Stone magazine’s “500 Greatest Songs of All Time.” It was also ranked by Pitchfork as the greatest song of the 1960s. The tune continues to be timeless through old, vintage recordings that continue to surface onto the Internet.

“God Only Knows” continues to be a hit to this day

“Paul McCartney says this is the most beautiful love ballad ever written. Now, THAT is high praise, indeed,” one fan comments on the video. Another says, “Pet Sounds and Sgt Pepper are the 2 best albums of all time. Difficult to choose but Carl’s vocals on this wonderful song just about swings it for the California lads.”

As a result of the song’s success, the Rock and Roll Hall of Fame included it as one of “500 Songs That Shaped Rock and Roll.”

Creators’ interpretation of the lyrics

According to Wikipedia, Asher has talked about his own interpretation of the song. “This is the one [song] that I thought would be a hit record because it was so incredibly beautiful. I was concerned that maybe the lyrics weren’t up to the same level as the music; how many love songs start off with the line, “I may not always love you”? I liked that twist, and fought to start the song that way.”
He continues, “Working with Brian, I didn’t have a whole lot of fighting to do, but I was certainly willing to fight to the end for that. …”God Only Knows” is, to me, one of the great songs of our time. I mean the great songs. Not because I wrote the lyrics, but because it is an amazing piece of music that we were able to write a very compelling lyric to. It’s the simplicity—the inference that “I am who I am because of you”—that makes it very personal and tender.”
Click for next Article

Previous article: WATCH: Tom Jones Challenges Jennifer Hudson In A Singing Battle On ‘The Voice UK’
Next Post: Dean Martin’s Daughter, Deana, Reflects On Growing Up With The ‘Rat Pack’