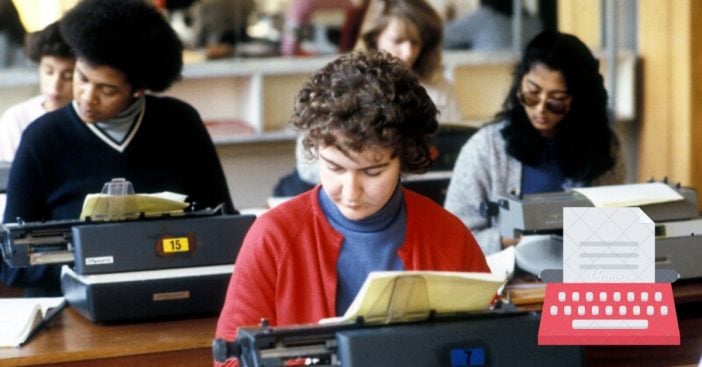 Typewriters still exist as a piece of nostalgic history, but hardly anyone still uses them. We now have computers, which make typing much faster and simpler. When you make an error on a typewriter, you have to white it out or start over! However, there is something so pure about typing on a typewriter. Do you remember taking a typing class and using one?

The first typewriter was patented in 1868 by Christopher Latham Sholes. Many tried to invent the typewriter before that, but this was the first one that actually got patented and sold around the world. In 1873, Christopher had a contract with the E. Remington company. Do you remember Remington typewriters?

Typewriters were starting to get replaced in the ’80s

Around the ’80s, computers began to replace typewriters. It has been said that the last typing classes with typewriters were offered sometime in the ’70s and ’80s. If you were born in the late ’70s or early ’80s, you may have learned how to type with both gadgets!

While laptops and computers have largely replaced typewriters, the keyboard looks very similar. These are called QWERTY keyboards, which represent the top row of letters. How old were you when you learned how to type on a typewriter? When was the last time you used one?

Learn more about the history of the typewriter below:

Click for next Article
Previous article: Erin Murphy Talks About How ‘Bewitched’ Series Addressed Racism
Next Post: Check Out This New Species Of Beetle Named After The Beatles