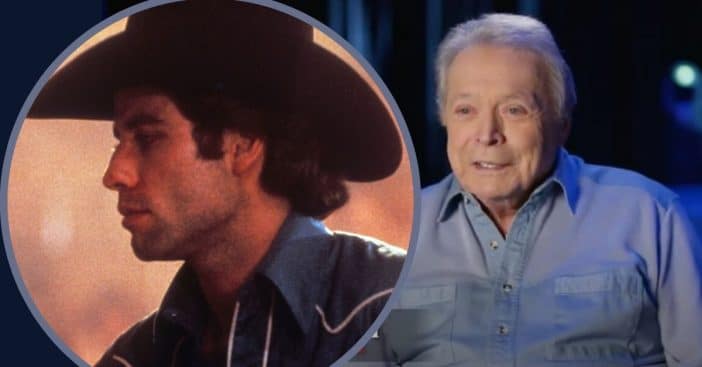 It was June 6, 1980, when Urban Cowboy came to theaters. Starring John Travolta, the film followed an Esquire piece about the real-life love story of two regulars at Gilley’s Club. Gilley’s Club was a place co-owned by country artist Mickey Dilley and his producer, Sherwood Cryer. The film would go on to help revive Gilley’s career and lead him to even being on-set during the filming of the movie with the rest of the cast.

“Not only was he a great actor, but, I mean, he’s a nice guy,” Gilley recalls in a new interview. The interview was for the 40th anniversary of Urban Cowboy. “John was just down-to-Earth about the whole thing.” He remembers that his mother-in-law even cooked dinner for Travolta one evening.

Mickey Gilley and his relationship with John Travolta during ‘Urban Cowboy’

Travolta was allegedly taking flying lessons at the time of filming Urban Cowboy. He and Gilley developed a bond while talking about flying, and Gilley even got to go on a practice flight with him!

RELATED: John Travolta Shares Rare Throwback To When He Started Flight School At 15

As previously mentioned, Gilley took part in a new video for the 40th anniversary of the film. It is part of the 40th anniversary Blu-ray release of Urban Cowboy, which was released on June 2nd. Good Times With Gilley: Looking Back at Urban Cowboy is one of the many special features on the Blu-ray release. Multiple deleted scenes, previously released outtakes, and rehearsal footage are also part of the new edition release. Check out part of Gilley’s interview for the Blu-ray release below!