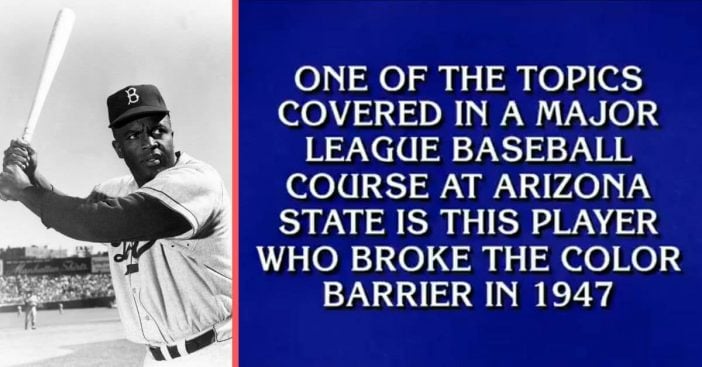 Jeopardy! viewers and baseball fans alike had reason to lose it the other day. Both became united when a contestant made what they saw as an outrageous mistake by mixing up Jackie Robinson and Babe Ruth. Alex Trebek asked for the name of a player who famously “broke the color barrier.”

University of Southern California sophomore student Xiaoke Ying buzzed in. Ying answered Babe Ruth. Immediately, the Jeopardy! announced that was wrong and turned his attention to opponent Nathaniel Miller. Miller finally replied with the correct answer. But people already saw and heard the wrong answer and voiced their thoughts on Twitter pretty quickly.

Twitter could not believe the Jackie Robinson-Babe Ruth mixup

AND ON HIS DAY NO LESS pic.twitter.com/CBsYnDqfcO

Baseball aficionados took great offense at the idea of mixing up Jackie Robinson and Babe Ruth. One Twitter reaction, shared above with a video of the fateful moment, said as much with the exclamation, “AND ON HIS DAY NO LESS.” Someone wasn’t very happy.

Indeed, Wednesday, April 15, when this mixup occurred, also marked Jackie Robinson Day. In 1947, Jackie Robinson made history with his debut with the Brooklyn Dodgers on April 15. This occasion also marked the first time a player broke the color barrier after decades upon decades of segregation. It should be noted, though, that the episode only aired on Wednesday, April 15. But it took place back in February. Because of COVID-19, there have been no new episodes of Jeopardy! until things are safer.

That was the wrong unique college course

The prompt that started it all resided under the category “unique college courses.” Ying, participating in the college tournament, went for the $1,000 clue that read, “One of the topics covered in the Major League Baseball course at the Arizona State is this player who broke the color barrier in 1947.”

Starting 9, part of Barstool Sports’ baseball podcasts, voiced exasperation that this should happen on Robinson’s day. Others on Twitter also voiced indignation at the sheer irony. They couldn’t help but notice when naming someone who supposedly broke the color barrier, she named a white player. “Babe Ruth is like the default answer for anyone uneducated about baseball,” one person tweeted. Another took things very personally by writing, “Jeopardy has got to be canceled forever. THE ONLY THING ONE SHOULD KNOW ABOUT BASEBALL IS WHO JACKIE ROBINSON IS. USC, y’all got some explaining to do.” Despite this hiccup, Ying actually went on to win that round against both Miller and Marshall Comeaux, a sophomore at the University of Texas. Because of this, she got to advance to the College Tournament’s final round. Episodes of that air Thursday and Friday.