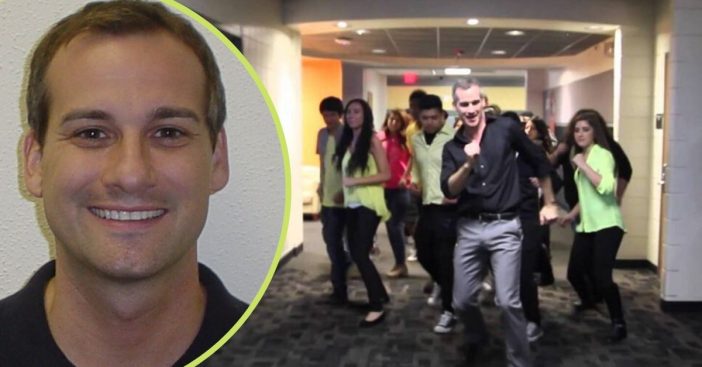 Good teachers can completely change how students view school. Instead of being a chore, attending classes should be an exciting event. A thirst for knowledge coupled with infectious enthusiasm from instructors makes each day a thrill. Different teachers implement different techniques to excite their students. One Texas teacher, Scott Pankey, knows how important it is to show his students that he cares, so he compiled a music video. Accompanying that video is “Uptown Funk.”

Naturally, a video like that involves a lot of high energy. But that’s exactly what Pankey wanted for his students while giving them a chance to complete a big project using their own skills. But he also took into account the stereotypically low energy of a classroom. The video starts off very self-aware and, really, stays that way throughout. Many people know how school is associated with boredom, so their video references that and contrasts it with the dance number. It’s a very fun, refreshing watch.

“Uptown Funk” won listeners over in 2015 when it debuted in Mark Ronson’s album Uptown Special. The song offers fans a lot to enjoy because of its mashup of genres. Additionally, the mounting energy made it an instant favorite at parties. That also makes it the perfect candidate for livening up a dreary classroom.

RELATED: Science Teacher Gone Viral Is Getting Students Excited To Learn With His Incredible Stunts

Pankey immediately fell in love with it after first hearing it, according to CNN. He then used his background as a theater teacher at A. Maceo Smith New Tech High School in Dallas to create something amazing. This dream is only natural for the school, Pankey explained to the Dallas Morning News. “We are a project-based school — there are only two in the Metroplex — and that means you give the students a project, put them in teams and they have to come up with solutions. They had three weeks to work on it, then present as a group what they learned.”

CNN reports that student council Vice President Bryan Urraca and senior class President Johan Cruz shot the entire video in one take. Overall, this feat remains a tribute to the students’ talent, as they played a crucial role in all this coming together. Pankey, himself, simply said he would be involved in the video if his six theater classes were okay with it. Evidently, they were.

The remarkable video appeared on YouTube in 2015. Today, it has over 14 million views. One of those viewers includes none other than Bruno Mars himself who admits he succumbed to tears when he saw the video. Watch it below and just try not to dance and sing along!