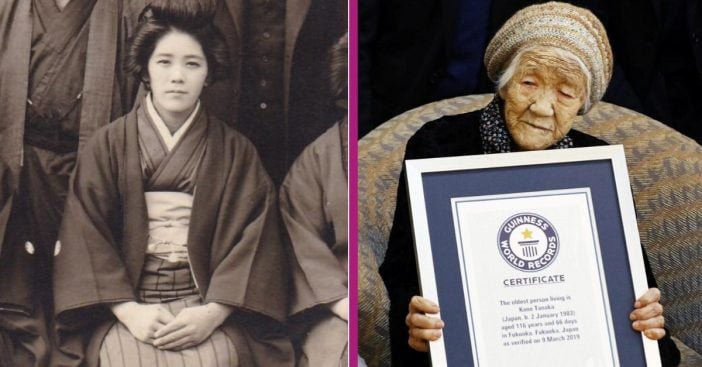 Japanese woman Kane Tanaka has just extended the record for the world’s oldest living person as she turned 117 years old recently. She celebrated her birthday in a nursing home in Fukuoka in southern Japan. The staff present and her friends helped celebrate the occasion. Her birthday was on January 2nd, 2020.

Tanaka shows signs that she still has a lot of life left in her as she enjoys her birthday party and a big slice of her cake. “Tasty,” she says, flashing a smile. “I want some more.” Tanaka was confirmed as the oldest living person last year as well when she was 116 years 66 days old as of March 9th.

Tanaka was born prematurely in 1903 and married Hideo Tanaka in 1922, according to Guinness World Records. The couple would go on to have four children and adopt a fifth into their home. Reuters reports on how symbolic Tanaka’s age is with Japan’s fast-aging population. In addition to that, Japan’s falling birthrate raises concerns for labor shortages and the future of Japan’s economic growth.

With this in mind, the percentage of babies born in Japan fell by about 5.9% last year to fewer than 900,000. This is the first time this has happened since the government started retrieving data back in 1899.

According to USA Today, the honor of holding the world’s oldest person last belonged to Chiyo Miyako, also of Japan. Chiyo passed away in July 2018 at age 117. Moreover, the oldest living person before Chiyo was also Japanese. Sounds like the Japanese have a lot of longevity on their side!

Click for next Article
Previous article: Breaking: 24 People Charged With Intentionally Setting Bushfires In Australia
Next Post: Pat Sajak’s Daughter, Maggie, Takes Over As Letter Toucher In Her Father’s Absence From ‘Wheel Of Fortune’