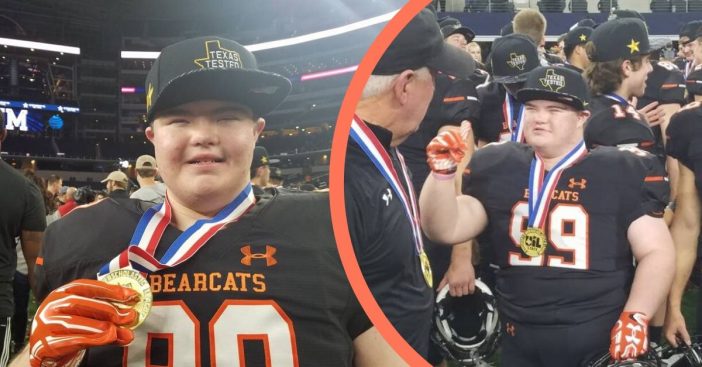 Even when a particular outcome seems inevitable, everything leading up to it can feel precious and important. During the Friday match at AT&T Stadium, Aledo’s eighth state championship was guaranteed long before the game ended. But for junior Bearcats wide receiver Blaze Mayes, that didn’t matter. At the end of the day, he was there for the memories.

The Aledo state champion won a few times that day. Above all, he reveled in some very powerful memories. These actually felt particularly impactful after Mayes hadn’t played for most of the game. Finally, he got the chance to participate with the rest of his team and contribute some valuable maneuvers.

Blaze Mayes gave it his all

This is what it's all about!

From the excitement on the sideline, you can tell they love their teammate.#UILonFOX pic.twitter.com/Al0APtMjsr

Mayes entered the game during the final play. Even so, he put his whole heart into making sure he and the rest of his team succeeded. Immediately, Mayes flanked Marshall’s defensive back. Clearly, he intended on initiating a tackle if need be. The run did not get to him, but Mayes had eyes only for the moment.

RELATED: One Person RSVP’s To Boy With Autism’s Party, Then An Entire Football Team Shows Up To Celebrate

Blaze Mayes found himself lined up at wide receiver when he was brought in for the game’s final play. Onlookers could see him positively shaking with excitement and anticipation. In those moments, Mayes exemplified a truly winning spirit that stayed with the Aledo state champion and his teammates right to the end.

Mayes shows the power of passion

The persistent march of time too often tries to deter us from our dreams. Other obligations run the risk of stifling what we truly want to pursue. Mayes knew from a very early age that he wanted to play football, and he was determined to get to that point. Years later, he can call himself a state champion.

The young adult was born with Down syndrome. Nothing has slowed his path to victory, however. In 2016, he crossed 20 yards to secure a touchdown for his high school team at Aledo High School during their freshman game. “We just let him play, and I think it was probably his most memorable moment yet,” said teammate Zachary Prestwood. The team’s joy can be seen below.

Click for next Article
Previous article: ‘Star Trek’ Actor William Shatner Planning Trip To Space At 89
Next Post: Paul McCartney Joins Wife Nancy Shevell In St. Barts For A Day In The Sun