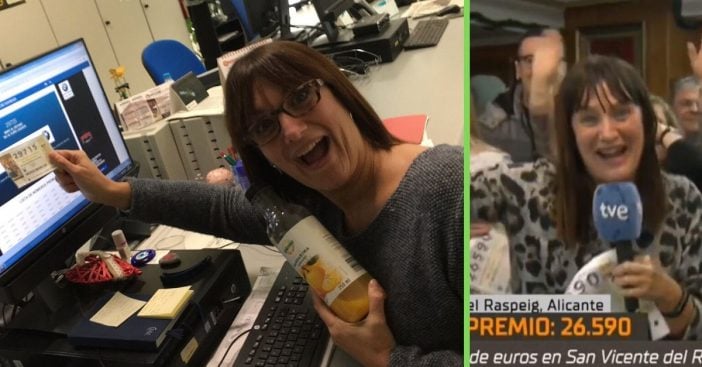 A Spanish television reporter named Natalia Escudero may have made a big mistake. She was covering a story about Spain’s annual Christmas lottery called El Gordo (The Fat One). She discovered on air that she was also a winner in the lottery! But, she got a little too ahead of herself.

She started celebrating and seemed to quit her job on-air, but then realized later that she only won about $5,500. Not exactly the type of money that would allow you to not work anymore! The way that the lottery in Spain works is that about 15,000 people can win different amounts.

Spanish reporter wins the lottery, quits job on-air then realizes her prize isn’t what she thought

Natalia was one of the ticket holders for a prize worth $444,000, but the prize money can be split in different ways. Unfortunately for Natalia, this meant that she only walked away with around $5,500. Before she knew the full news, she started celebrating and exclaimed, “I’m not going in tomorrow! Natalia doesn’t work tomorrow. Woo!”

RELATED: How To Increase Your Chances Of Winning The Lottery

At first, her colleagues didn’t know how much she had won. They seemed excited for her. Natalia began to celebrate with other lottery winners on air and asked people in the crowd what they plan to do with their winnings.

At the location of the report, forty tickets had been sold. The winning number was worth 16 million euros (over $17 million). However, per the lottery rules, people can purchase tickets at cheaper prices, but these winning tickets will see smaller prizes. That is what Natalia did.

Later, after learning that her prize wasn’t what she thought, she revealed to the camera that “she had not been touched by the grand prize of the lottery, only a ‘pinch.'” Many viewers were angry at her reaction and felt she was unprofessional. Natalia later apologized on Twitter and said she had been going through a tough time.

No word on if she is still an employee at the news station. However, she was not at work the next day because she was indeed going on a holiday break. Watch the video below: