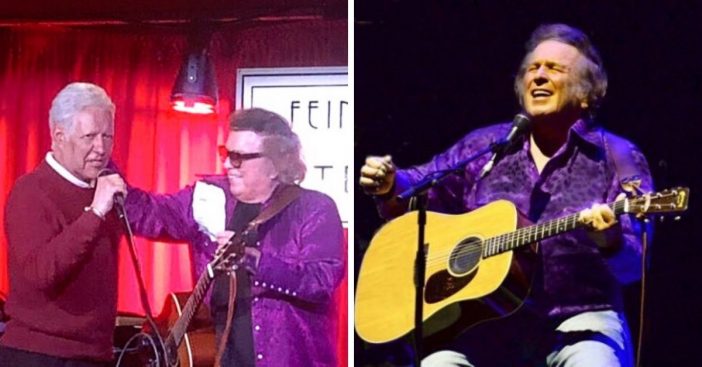 Longtime Jeopardy! host Alex Trebek held the show’s annual holiday party at Feinstein’s at Vitello’s in Los Angeles recently. This year, there was a very special performance at the party! Don McLean came out and performed for the crowd, including huge fan Alex Trebek.

Alex admitted that he asked Don to play at the party. He said he sent an email to Don’s people from the contact information on his website. Reportedly he said, “I can officially take this off of my bucket list. This was a real treat for me.” Jeopardy! posted some fun photos of the party, check them out below.

When Don arrived at the party, he said, “Alex handed me a piece of paper with a list of songs he wanted me to perform and in the order he wanted them performed in. Then when I looked next to each song, he had timed them out.”

Usually, he just comes in and performs whatever songs he wants. But, he could tell how much of a fan Alex is and how much time he put in to create a setlist. He continued, “I looked at Alex and said, ‘Well, tonight is your night and I will do exactly what you want.’ And that is what I did. Except I did toss in one Christmas song in the spirit of the event! Alex is a wonderful man and is loved by the world.”

The party looks like so much fun! In conclusion, watch a nostalgic performance of “American Pie” by Don McLean:

Click for next Article
Previous article: Friends Ask Neighbor If They Can Play With Their Dog And The Dog Responds
Next Post: Do You Remember When MTV Reunited The Monkees For A Christmas Medley In 1986?