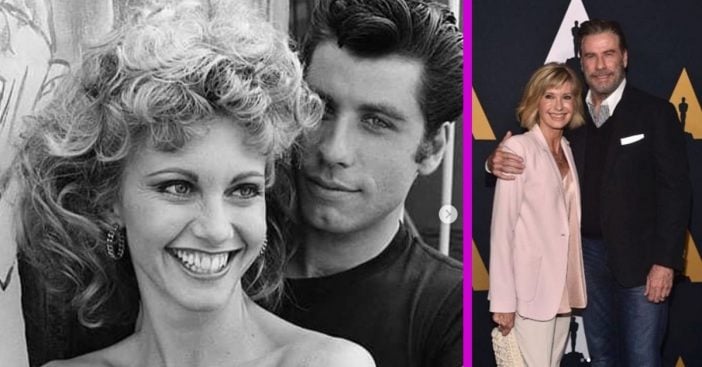 Olivia Newton-John recently celebrated her 71st birthday. Her longtime friend of over 40 years, John Travolta, was quick to honor his friend for her birthday in an Instagram post. Travolta shared a photo of the two from the set of the hit musical movie Grease in 1978 and added a sweet caption to match.

“Happy Birthday Olivia! All my love, JT,” the caption says. If you swipe right on the Instagram collage, you can see a recent photo of them from the 40th-anniversary screening of Grease.

The two actually met for the first time on the set of the film, where he played bad-boy Danny Zuko and she played good girl Sandy Olsson. Their characters meet from different parts of the world and soon enough they find themselves now attending the same school when Sandy’s family ends up staying in America for good (as she as originally from Australia).

The two end up falling in love and staying together despite being from two different worlds, literally and figuratively. Newton-John recently opened up about her transformation into “bad Sandy” at the end of the film and how much attention she got from being all dolled up like a bad girl!

“I walked on set wearing the costume while John [Travolta] was in the middle of filming a song. The reaction I got was so unexpected *laughs*. First of all, [the cast] didn’t know who I was. And then I got all of this attention from the guys. I just thought, “Oh my goodness! Is this what it takes?” *laughs*.”

As far as Newton-John’s battle with cancer goes, it sounds like she’s doing pretty well these days! She says that last year in September she was “bedbound,” but now she’s doing “great.” When asked if she is in remission yet, she has a simple yet thought-provoking answer.

“I don’t call it remission — I just say I’m living with it. I’m living with it very well. To think that you could get rid of every single cell is not really a reality at this point. But I’m feeling great. Things are shrinking.” Newton-John has been very open in regards to her usage of medical cannabis during her cancer battle. It seems to have helped a ton!

Click for next Article
Previous article: Dolly Parton’s ‘I Will Always Love You’ Altered Her Career Forever
Next Post: HGTV Is Following Up ‘A Very Brady Renovation’ With A New Holiday Special