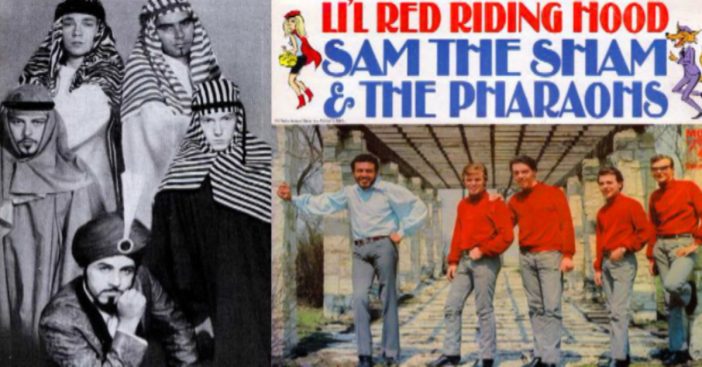 Also known as “Lil’ Red Riding Hood,” is an updated version of the Little Red Riding Hood fairy tale, with the lead singer portraying the wolf. In this context, the singer is preying on the girl through lies and deception in an attempt to win her favor and take advantage of her. An aggressive guy might play lots of tricks to seduce an unsuspecting girl, is a scene played out in many social situations.

Written by Ronald Blackwell and produced by Stan Kesler, this was the second big semi-novelty hit for the Texas band Sam the Sham & the Pharaohs. For instance, their debut hit “Wooly Bully” also made it to #2.

Sam, whose real name is Domingo Samudio, developed his act in the Dallas area where he played lots of local dances. With the Pharaohs, he became a comedy act, touring in a hearse and wearing turbans and Egyptian garb on stage. Some of their other songs were “The Hair On My Chinny Chin Chin,” “I Couldn’t Spell †&%[email protected]?!” and “Pharoah A-Go Go.”

The group’s female backup singers were known as The Sham-Ettes, and when “Little Red Riding Hood” took off, the group’s record label, MGM, had the Sham-Ettes release an answer song called “Hey There Big Bad Wolf.”

Do you remember listening to Sam the Sham and the Pharaohs?

Maybe you’ll see things my way before we get to grandma’s place
Hey there Little Red Riding Hood you sure are looking good
You’re everything that a big bad wolf could want
Owo I mean baa, baa

Click for next Article
Previous article: Captain and Tennille and the Song that Kept them Together
Next Post: Rod Stewart’s “The First Cut Is the Deepest”