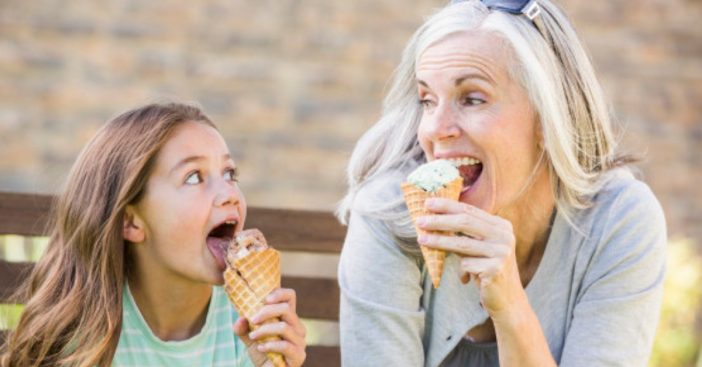 Trips to your grandparents’ house when you were little was always the best. Whenever you’d go over, it consisted of sugary treats, savory snacks, and a whole lot of lovin’. However, studies have shown that grandparents who partake in this indulgent behavior can put their grandkids’ health at risk long-term.

Researchers from the University of Glasgow reviewed 56 studies with data from 18 different countries on the care provided by the grandparents who are not the legal guardians of their grandchildren. The results from the data showed that the grandparents’ habits were negatively affecting their grandkids’ health in terms of diet and weight.

It’s very typical that trips to your grandparent’s house mean things that aren’t usually allowed at home, like extra snacks or lots of TV time. The studies that were reviewed showed that not only does this behavior negatively affect the health of their grandkids long-term, it also increases their risk of developing cancer down the road.

Additionally, grandparents who smoke also put their grandkids at risk for secondhand health issues. All of these things mixed together have been deemed risk factors for things like heart disease and diabetes.

The studies show that it is abundantly clear that kids will often learn both healthy and unhealthy habits from an early age. Despite this, it’s still known that these unhealthy habits that grandparents may be exposing to their grandchildren are not intentional. Dr. Stephanie Chambers released a statement on the findings.

“While the results of this review are clear that behavior such as exposure to smoking and regularly treating children increases cancer risks as children grow into adulthood, it is also clear from the evidence that these risks are unintentional,” she said, “Currently grandparents are not the focus of public health messaging targeted at parents and in light of the evidence from this study, perhaps this is something that needs to change given the prominent role grandparents play in the lives of children.”

It’s important to note the benefits of quality time spent between grandparent and grandchild. The studies do state that “grandparents play a beneficial role in children’s lives in many other ways. Spending time with grandma and grandpa can enhance kids’ social and emotional wellbeing.”

The study does state that any recommendation to limit their time together would be ‘misplaced’ and that interaction is important for both the grandparent and the grandchild.

“Given that many parents now rely on grandparents for care, the mixed messages about health that children might be getting is perhaps an important discussion that needs to be had,” says Dr. Chambers.

Be sure to SHARE this article to spread awareness about the health habits between grandparents and grandchildren!