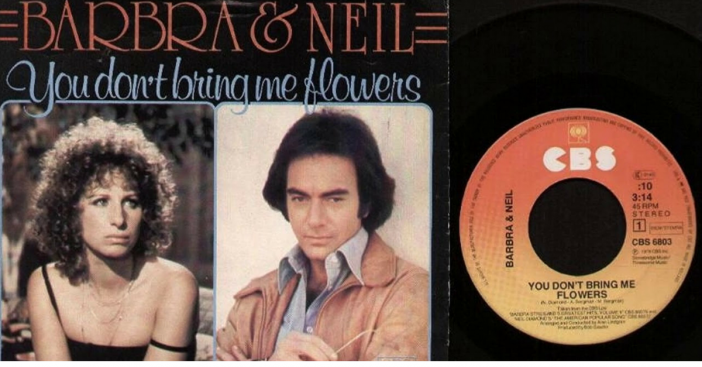 “You Don’t Bring Me Flowers” is a song that hit the top of the Billboard Hot 100 chart in 1978. It is a song about two lovers who have drifted apart while they “go through the motions” and heartache of life together.

The song was written by Neil Diamond with Alan Bergman and Marilyn Bergman for the ill-fated TV show All That Glitters. The song was intended to be the theme song, but Norman Lear changed the concept of the show and the song was no longer appropriate. Diamond then expanded the track from 45 seconds to 3:17, adding instrumental sections and an additional verse. The Bergman’s contributed to the song’s lyrics.

The roots of the duet version, as chronicled in myriad Streisand and Diamond biographies as well as Streisand’s Just for the Record box set, revolve around WAKY-AM/Louisville KY program director, Gary Guthrie, who spliced the two solo tracks together as a going away present to his wife, whom he had just divorced. As the real life fairytale behind the song unfolded, it triggered a media buzz worldwide from Good Morning America and People magazine to the BBC. Interest in the duet caused such a clamor on the retail level that Columbia Records was compelled to bring Streisand and Diamond into the studio to record an “official” version in October 1978.

The song reached number one on the Hot 100 chart for two non-consecutive weeks in December 1978, producing the third number-one hit for both singers. Acknowledgment and gratitude for Guthrie came from CBS with a Gold record plaque, flowers from Diamond and a telegram from Streisand. The duo performed the song at the 1980 Grammy Awards show, a performance released on the 1994 album Grammy’s Greatest Moments Volume I. The song peaked #17 in the Spain Top 40 Radio.

“You Don’t Bring Me Flowers”

When it’s good for you, babe
And you’re feeling alright

Well, you just roll over
And you turn out the light
And you don’t bring me flowers anymore

And baby, I remember
All the things you taught me

You don’t bring me flowers anymore

Well, you’d think I could learn
How to tell you goodbye

You don’t sing to me

And you don’t sing me love songs

You don’t bring me flowers anymore

Here’s Neil performing the song in 2008

Click for next Article
Previous article: Monday’s “DYRT” – April 24
Next Post: How Well Do You Know These Classic TV Shows? (Part1)