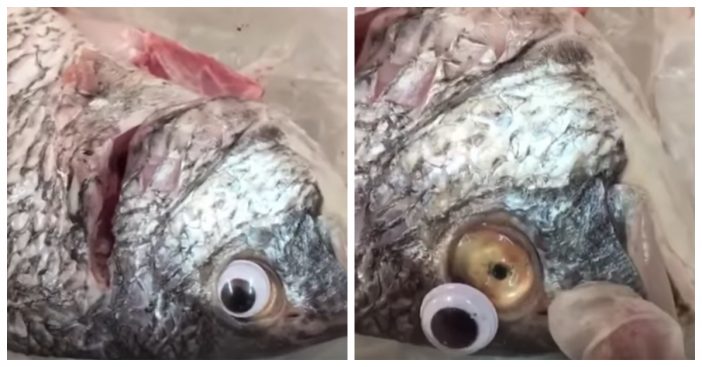 Yes, you read that right, and you might want to take a better look at the fish you’re considering purchasing next time around. A seafood store owner was recently caught putting googly eyes on old fish to make them appear fresher. The fish were apparently ‘several days old’ according to Newsweek.

The Department of Commerce shut down the shop immediately upon a YouTube video going around of a customer finding the googly eyes and removing them from the fish. The video has since gone viral and it’s sparking both humor and disgust in viewers all over the world.

The seafood store was located in Kuwait. The Al Bayan newspaper was the first to report on the situation which soon made headlines all over the world. It’s such a popular story that even some of the best responses and fish-related puns are surfacing on social media. We feel bad for the customer who received the googly-eyed fish, but we’re sure they’re laughing about it now, maybe…?

Never judge the freshness of fish by the googliness of their eyes. https://t.co/hW50lwpwCz

Matthew is totally right. Their eyes might be googly, but they might be too googly, you know? Just play it safe next time you’re buying seafood, with eyes.

Well this certainly looks fishy. I hope they go to court and are found gill-ty. https://t.co/aB3fh871WE

“The scales of justice”. Now, those are some fighting words!

The scales of justice shall decide.

While this is definitely a poor business practice, it surely is quite humorous to think that this seafood store owner actually thought people wouldn’t catch on eventually. Now, moving away from the humorous bit, there’s actually a lot of harmful side effects that the body can endure from consuming old or spoiled fish.

There are two types of food poisoning that can arise from spoiled fish called scombroid and ciguatera. Neither of these types can be detected by taste or appearance, but they occur when fish is not properly refrigerated from the time they were caught until the time they are served. Both these food poisonings may cause a slew of gastrointestinal issues including nausea, vomiting, diarrhea, and abdominal pain. Both food poisoning bouts can last for months or even years, according to the Poison Control Center.

In conclusion, this seafood store owner is probably thanking his lucky stars that this case didn’t involve any lawsuits from sick customers.

View the entire clip revealing the old fish below and don’t forget to SHARE this article with a friend. It might make you think twice next time before purchasing fish!

Previous article: Kelly And Blake Spin Their Chairs At The Same Time To Fight After Veteran’s Blind Audition
Next Post: You Can Now Stay In A Cottage Made Entirely Out Of Chocolate