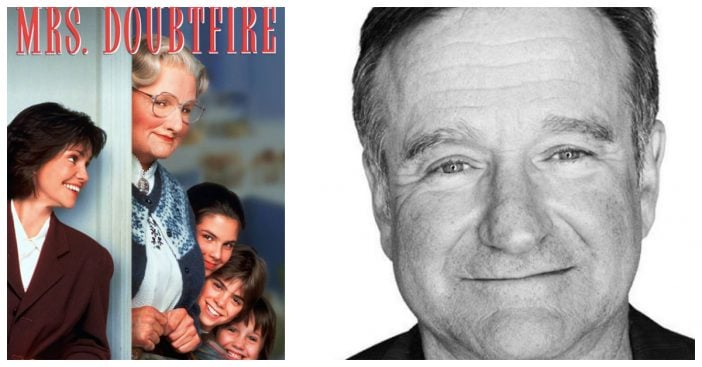 One of the most iconic Robin Williams films in history will be making its mark on Broadway hopefully sooner rather than later! The 1993 comedy will be adapted by the writers of Something Rotten and the director of Hello Dolly!” Jerry Zaks. There is no telling on when we can expect the ’90s film to hit the stage.

According to news reports, the film has actually been in development for a stage play since 2015. Producer Kevin McCollum issued a statement about the developments this past week, saying, “Mrs. Doubtfire is such a beloved story, both laugh-out-loud hilarious and extremely moving. Getting this team together and crafting Mrs. Doubtfire for the stage has been pure joy. We can’t wait to get into production.”

Sources say that composer Alan Menken was originally going to supply music and lyrics, but has stepped away to write new music with David Zippel. It is now confirmed that Karey and Wayne Kirkpatrick will be supplying original music and lyrics for Mrs. Doubtfire the musical. While the show does have a full creative team at this time, a full cast has not yet been announced.

Mrs. Doubtfire is about a reckless father of three named Daniel Hillard, who becomes newly divorced and is not able to be with his children; the ones who mean the most to him. With help from his brother, he is able to transform himself into an old nanny and lands a job babysitting his three children for his ex-wife. She calls herself Mrs. Doubtfire. However, Daniel’s secret is soon exposed when both Daniel and Mrs. Doubtfire are expected at the same place on the same night.

The late Robin Williams was the star of Mrs. Doubtfire, playing the title role. Williams was well-known for his humor and comedic roles throughout the years. Despite Mrs. Doubtfire arguably being Williams’ most notable role, he is also remembered for his more serious roles in other films like Dead Poets Society (1989), Good Will Hunting (1997), and What Dreams May Come (1998).

Previous article: This Compilation Video Of Baby Goats Jumping For Joy Will Warm Your Heart
Next Post: This “Farmer In The Dell” Got A Drastic Makeover That Made Him Look Like A New Man