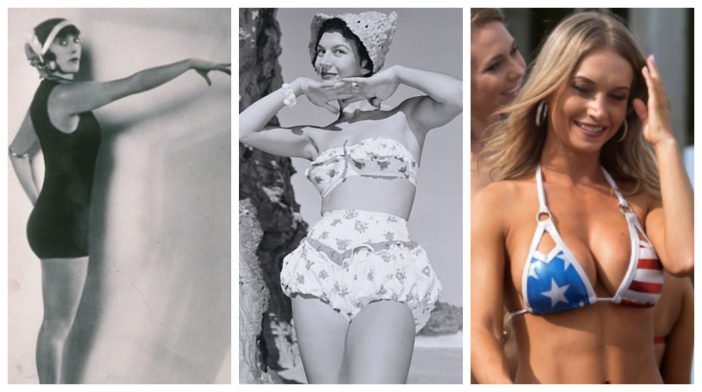 Every girl’s favorite and most comfortable swimwear outfit has actually been around for much longer than we think. When we think of the 1800s, we think swimming in literal dresses. Well, that’s not entirely the case. Evidence of bikini-style clothing has been around since 5600 BC. The evidence takes the form of Roman art pieces presenting women wearing bikini-style garments.

French engineer Louis Réard invented the modern bikini in 1946 and he actually borrowed the name ‘bikini’ from the Bikini Atoll, where post-war testing on the atomic bomb was taking place. It’s unknown where the original idea for the bikini-style garment came from.

The Roman era began the age of sexualizing women in the two-piece garments. Artwork dating back to 286-305 AD depicted a group of women known as the ‘Bikini Girls’ exercising in what we now know as the modern day bikini. Many correlated the idea of lust and erotica with that of the bikini or girls in a bikini. Prostitution, skimpy clothes, and athletic bodies we are all equally related in this time period, meaning that the bikini would also now be sexualized as well. The Roman Goddess Venus was also depicted wearing a bikini and the statue is currently featured at the Naples National Archaeological Museum.

Now begins the long interval of no bikinis in which we know as, the 1800s swimming gown. Bikinis were discouraged after a certain point in time where the classical bikini was seen as a bit too raunchy. There was simply no need to be showing so much skin just to go swimming. It wasn’t until 1907 that the first breakthrough for women’s swimwear occurred and eventually evolved into the modern day bikini.

As time surpassed through the 20s, 30s, and 40s, society began seeing more and more spaghetti strap bikini tops and a whole lot more midsection. The two-piece was becoming incredibly popular again and were especially popular postwar. These were known as the traditional two-pieces, so when the minimalist bikini came out (what we know best today), sales were plummeting.

Many people thought that this skimpy suit was disrespectful to women and no decent girl would ever wear it. However, when the 1960s sexual revolution hit, the skimpy bikini became widely known and loved. Icons like Marilyn Monroe, Jayne Mansfield, and Gina Lollobrigida all embraced the minimalist two-piece.

Throughout the years, the bikini has become much more minimalist and revealing. They still hold strong the original sex appeal from the Roman era, hence the use of bikini pageants and super revealing tops. Despite the acceptance of the modern day bikini, countries like Spain have made it illegal to wear bikinis in public except on beaches.

Gwyneth Paltrow was also largely criticized for making a bikini line for girls ages 4 to 6, claiming she was sexualizing young children. Finally, four women were arrested in Myrtle Beach, SC in 2013 for indecent exposure as their bikini bottoms exposed their buttocks area.

The bikini has clearly been through way too much. Be sure to SHARE this article if you found the history of bikinis interesting!