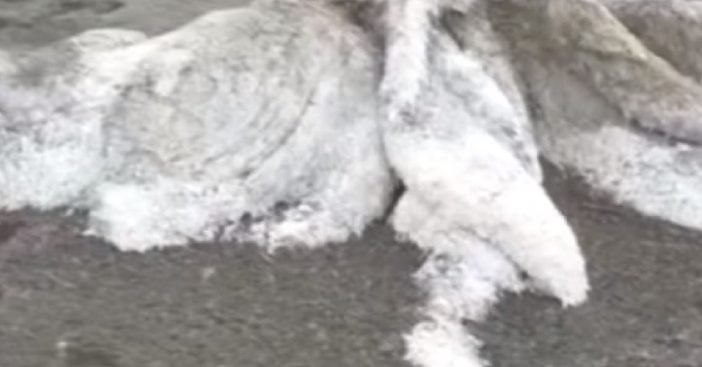 A massive, myseterious sea creature washed up on a beach in Russia and no one has any clue what it is. Something washed up on the shore of the Bering Sea on the Pacific side of the Kamchatka peninsula. It was huge, smelled very bad and was hairy. You can clearly see a tail.

It was first reported and filmed by a witness named Svetlana Dyadenko. It appears to be some sort of animal with gray and white coloring, fur and a tail. You can’t really see a head or any other specific body parts though. The fur is said to be similar to that of a polar bear.

It was so heavy that it wouldn’t be able to be moved by people alone. Part of it was covered in sand as well. Svetlana asked if it could be an ancient creature and asks scientists to find out what it is. Viewers of the viral video thought it could be woolly mammoth remains or some type of octopus or squid.

Another person commented said it could be a “globster”. This was a term made up in 1962 to identify another similar sea creature. Scientists believe that these globsters are not really a sea creature, but decaying parts of sea mammals. The Siberian Times once reported that a globster was a “Tasmanian carcass” with “no visible eyes, no defined head, and no apparent bone structure.”

Scientists seem to believe it is part of a whale or a shark that could have been affected by the sea, time or other animals. It could be part of a whale that was changed over time. Scientists have often seen this phenomenon happen where sea creatures take on bizarre forms after the influence of other factors.

What do you think this sea creature is that washed up on shore? Do you think it is an ancient creature or a type of “globster” like scientists believe it is? Or are you just stumped?

If you found this article interesting, please SHARE with your friends and come up with your own theories of what this sea creature could be!

Previous article: Winona Ryder Reveals She And Keanu Reeves Might Have Been Married For The Last 25 Years
Next Post: Kim Fields And Mindy Cohn Reunited For ‘Facts Of Life’ Co-Star Charlotte Rae’s Memorial