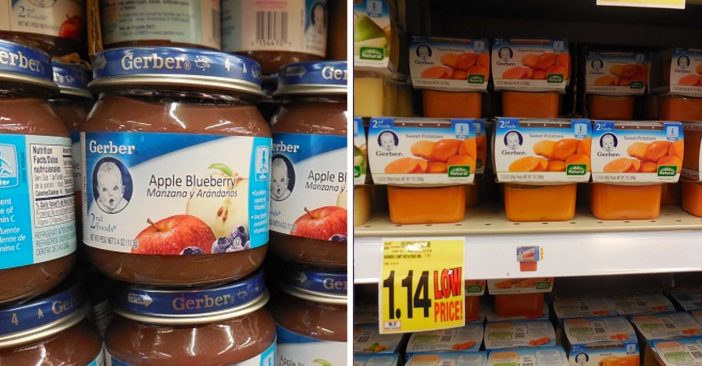 Consumer Reports recently discovered “concerning levels” of heavy metals in some baby foods. The metals include arsenic, cadmium and lead, and they’re being found in some of the most popular baby foods. After testing 50 samples, Consumer Reports claimed that they found at least one of these metals in every sample tested.

James Dickerson, the Consumer Reports chief science officer, weighed in on the findings of metals in baby food. He said, “This is of a concern because people should not have heavy elements or heavy metals in their food, particularly for their children.” If consumed over time, this can pose some serious health problems down the road for children.

The report concluded that 68% of the samples included those heavy metals at levels that would consider it a large health risk. 30% of those products raised greater concern for those children who consume these products regularly. Additionally, those products containing rice and sweet potatoes contained higher levels of metals.

Despite this news, Dickerson says that parents should not be terribly alarmed or concerned. “As a parent, you should not be gravely alarmed by this, but it should be a bit of information that you use to make balanced choices for your children,” he said upon the news breaking.

Dickerson also stated that these heavy metals could form naturally due to soil, contaminants in the water, or equipment used in the processing of food.

Among the brands included in the heavy metals discovery include Gerber, Beech-Nut, Baby Mum-Mum, Parent’s Choice, Happy Baby, and Plum Organics. Some of these companies have spoken out on the claims. Gerber says, “Trace amounts of many elements occur naturally in our environment — so it’s possible they can get into fruits, vegetables, and grains as they grow.”

Additionally, Beech-Nut chimed in saying that they, “upgraded the requirements for its third-party lab testing to help meet our goal of minimizing heavy metals as much as possible.”

The director of food safety research and testing at Consumer Reports, James E. Rogers, gives a final thought on the heavy metals being found in these baby foods.

He firmly states, “In about a third of the products we tested, the amount of heavy metals were below our level of concern, and for some the products, amount of some metals were not measurable. That indicates that there are ways for manufacturers to significantly reduce or eliminate these metals from their products.”

Be sure to SHARE this article to spread awareness about these potentially concerning findings.

Previous article: Breaking: Queen Of Soul Aretha Franklin Dies At Age 76
Next Post: Conjoined Twins That Were Separated At 7 Months Old Are Now Thriving At 17