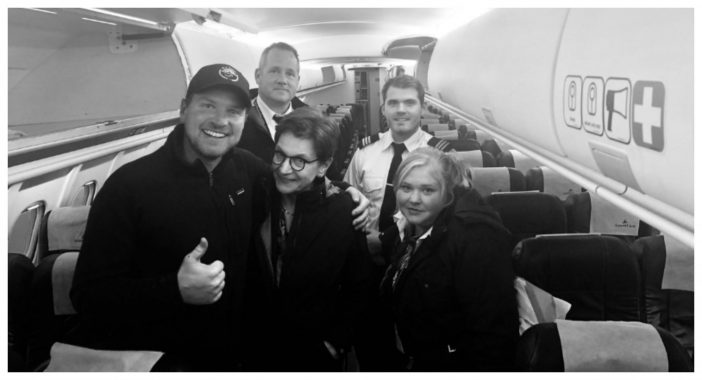 A man by the name of Christopher Paetkau accidentally took a 1,864 mile trip on the wrong plane. The plane that he ended up boarding was going to Iqaluit when he was originally going to Inuvik. Despite the freak accident, he couldn’t help but post about it and laugh. It looks like he made friends with some of the plane staff and other plane members, too!

“I just boarded the wrong airplane and flew to the wrong destination. Can’t believe it. Where will I end up next?” Paetkau posted on his official Twitter account. Paetkau and First Air have also been going back and forth on Twitter over the past 24 hours and it’s pretty hysterical.

Kind of incredible how this happened. But I’m heading back to #Yellowknife now after a tour of the #arctic. Decided to make the best of it… so did the @FirstAir captain and crew. We’re buds now! pic.twitter.com/qVECX6OKeQ

Since he decided to make the best of the situation, he pretty much got a tour of the Arctic for free and got to avoid all responsibilities for that time period. Now, I’m sure you’re all guessing what the banter was about online between Paetkau and First Air.

We aim to please! Since you're buds with our crew and Captain, you're friends with the entire First Air family too! We expect a holiday party invite of course! https://t.co/SLezZQKJ9j

When First Air remembers you and recognizes that you’re now family, that’s when you know you’re in.

Ohhhhh I’ll be there. Probably by accident though 😂

Paetkau responds with a jab at the hilarity that was his own mistake. He says that he’ll be there for a holiday party, but by accident…

We’ll make sure the location is clearly marked 😉

…In which case First Air responds that they will have the location “clearly marked.” With a winking face. They’re in with the times.

My husband @ChrisPaetkau ladies and gentlemen: Winnipeg man flies nearly 3,000 km in wrong direction after getting on wrong flight to Arctic https://t.co/8ExMmV24md

His wife even chimed in with the choir. I bet she’s totally face-palming right now that her husband made the news for a mistake flight.

I've had my bag wind up in Iqaluit instead of Inuvik, but never my whole person!

Some people are even wondering how Paetkau got himself into this mess, stating that their luggage had ended up elsewhere, but not them! Paetkau couldn’t help but respond with a hysterical, “I’ve had the same… although this time my bags went to the right place. I was, however, in the wrong one.” At least he’s honest.

On Twitter, he’s been responding to thousands of people inquiring about the incident. He stated that he was just really tired and a series of errors were made that caused everything to happen the way it did. He even uploaded a video about the situation with no audio. Looks like we can’t let Paetkau travel solo!

I just boarded the wrong airplane and flew to the wrong destination. Can’t believe it.

Be sure to SHARE this article if you laughed at this story!

Previous article: This Abandoned Flintstones Theme Park In Arizona Is Eerily Nostalgic
Next Post: Studies Reveal That People Who Decorate For Christmas Earlier Are Happier