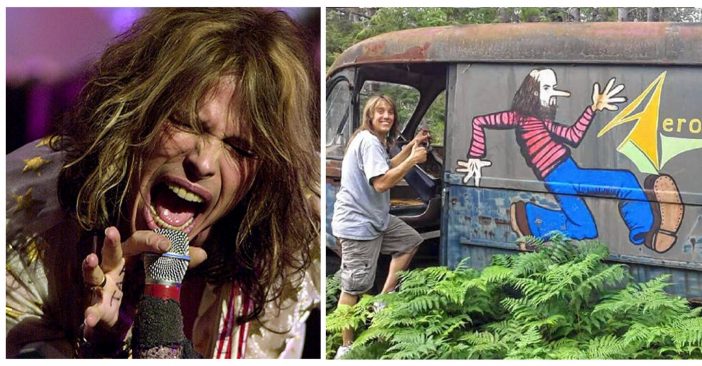 The original Aerosmith van was discovered by the hosts of the History Channel’s “American Pickers”. The 1964 International Harvester Metro van was found in the woods of Massachusetts decades later after being abandoned in the ’70s.

In an episode of American Pickers that aired on July 30th, hosts Mike Wolfe and Frank Fritz paid a visit to the town where the van was located to inquire about it. When they found the van, the door was missing, the tires were flat, and the paint was beginning to rust off. Wolfe described it as “a piece of American rock and roll history,” and would pay top dollar for such a nostalgic find.

@Aerosmith Saw @americanpickers Last night discovering this hidden treasure from the Greatest Rock Band ! Really Cool -AMERICAN HISTORY now in the right hands ! Excited to see what the do with it. Hope Aerosmith tell share some stories around it on the follow up. pic.twitter.com/RkTe1F1tUd

The reason why Aerosmith abandoned the van or why is unknown. Some members of the band were Massachusetts natives, and so Wolfe and Fritz set out to connect with Ray Tabano, a founding member of Aerosmith. Tabano was able to confirm that they had tracked down the real, abandoned Aerosmith van and it was 100% authentic.

TONIGHT! We may have found the original @Aerosmith tour bus… tune in to find out 9/8c! @americanpickers @HISTORY pic.twitter.com/dVaaqG3TVI

Tabano recalls the van being the “rolling hotel” for the band that was used to transport them from show to show back in the day before they made it big.

“I just flashed back to when we started the band,” Tabano says as he lays eyes on the abandoned van for the first time in several years. They went inside the van to take a look and Tabano recognized every single inch of it.

The abandoned van apparently now belonged to an owner named Phil who was just living off the grid in the middle of the woods. He claims that the van was already on the land when he purchased it. Wolfe and Fritz paid Phil a whopping $25,000 to part ways with the van and hand it over to the nostalgia professionals.

The first Aerosmith album was a self-titled studio album released in 1973, although the band formed in 1970. This was back when they were still trying to make a name for themselves and become a household staple for music, hence why they used a run-down dinky van for transportation.

Their most recent studio album was in 2012 titled Music From Another Dimension! and have done a number of tours since their last album release.

Be sure to SHARE this article if you remember Aerosmith back in the day!