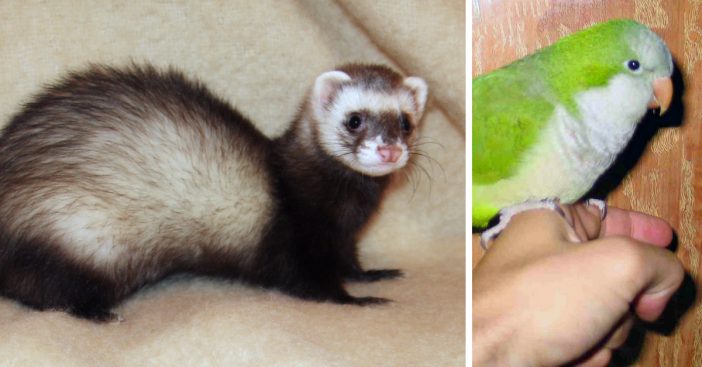 Pets are wonderful additions to our lives. You might have a cat or a dog but want a more exotic pet. Some pets, like ferrets, are relatively common in our culture, but are actually illegal to own in certain states! Did you realize this? Even though they are often sold in pet stores, they might be illegal to own.

Learn the most common pets that are actually illegal to own in some areas. You might just be violating state laws if you own a ferret or a hedgehog!

Hedgehogs are small and very cute pets, but many states actually don’t allow you to have them as pets. If you live in New York City, Arizona, California, Georgia, Hawaii, Maine, Pennslyvania or Douglas County, Nebraska, you can’t have a hedgehog. Hedgehogs, in general, should be in the wild and their quills can become very sharp and hurt you.

Ferrets are often in pet stores, but New York City, Hawaii, California, and Washington D.C. won’t have them. Ferrets can carry rabies which is why some states choose to make these pets illegal. If you have a pet ferret in Hawaii, you could get up to three years in prison and a maximum fine of $200,000.

If you love adorable little hamsters, you can’t own them in California or Hawaii. These animals could establish wild colonies and damage crops if they escape from a home.

Pigs can be a fun pet and are said to be smarter than dogs. But, if you live in New York City, you can’t have a pet pig. It could be because they are known to become aggressive.

Hawaii is really strict on pets! You can’t have snakes or giant lizards there because they pose a serious threat to Hawaii’s environment if they were to get loose.

These sweet little birds are banned in California, Connecticut, Colorado, Georgia, Hawaii, Kentucky, Pennslyvania, Rhode Island, Tennessee, and Wyoming. If they get loose, they can create their own flocks and throw off ecosystems. So, naturally, these states don’t want to risk it.

Do you have any of these “banned” pets? Are they legal or illegal in the state you live in? If you enjoyed this article, please SHARE with a friend!