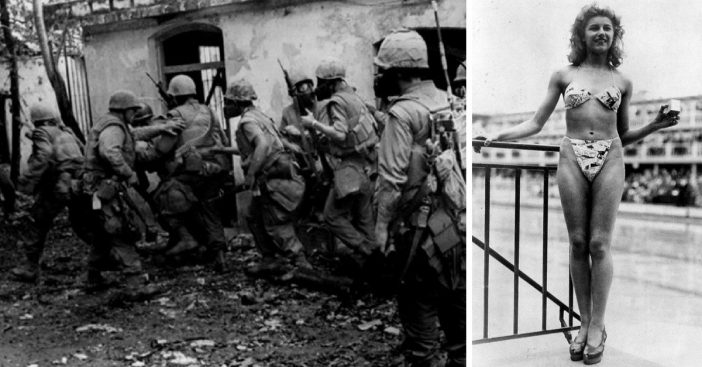 Do you ever wonder where certain words or phrases come from? They are so normal in our culture, but if you stop to really think about them, they may sound strange. Some words or phrases actually started out as different meanings in the military. Some might surprise you.

Here are some words and phrases you’ll never guess came from the military.

No, they didn’t wear bikinis in the military. But, in 1946, the United States tested a new atomic bomb on the Bikini Atoll in the Marshall Islands. Around the same time, Louis Reard, a French designer, was inventing a two-piece swimsuit. He heard the word bikini and they have been called this ever since.

A deadline was originally much more literal than it is today. In the Civil War, prisoners were confined and surrounded by a “deadline.” If a prisoner crossed this line, they would be shot. Luckily we aren’t shot these days when we miss our deadlines.

This now means a box-office hit or the old movie rental store, but during World War II it had a much scarier definition. It was a bomb that was big enough to destroy a city block. Makes sense right?

This word actually means “forefront” in French and now means something that is new and unusual. Back in the day, it meant a small party of troops that led the way for others.

You might already know that SOS comes from the military. It was actually first used by the Germans in 1905. Those letters were chosen for their Morse code.

If you need to do something you don’t want to do, someone might tell you to bite the bullet and get it over with. Back before painkillers, wounded soldiers would literally bite a bullet to try to cope with the pain. Bullets were used because they didn’t usually break their teeth. Ouch!

You might pass a test with flying colors. The old military definition was similar. When a Navy ship returned home after they won a battle, the flags or “colors” as they called them, would be flying.

Did you know any of these words or phrases originated in the military? Which one do you use the most? If you enjoyed this article, please SHARE with your friends!

Previous article: How To Protect Your Dog From Saltwater Poisoning On The Beach
Next Post: The Craziest Pets That Actually Lived In The White House