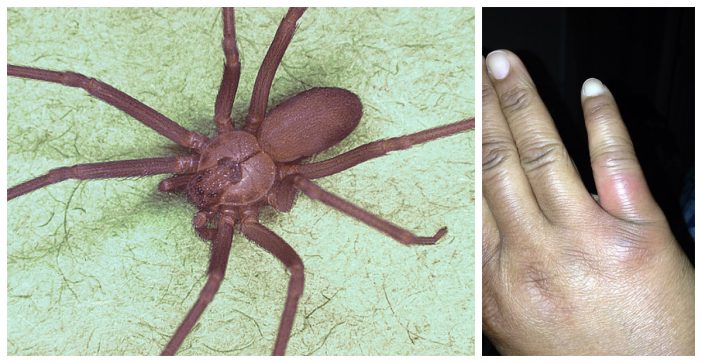 Brown recluse spiders are in the category of the most venomous and dangerous spiders in the United States. If not given proper treatment, a brown recluse spider bite could even result in death. There have been multiple stories nationwide about these nasty arachnids getting too close for comfort and causing life-altering injuries.

Two recent stories come from Kiara Boulton of West Memphis, AR and Tamara Owsley of Topeka, KS. Both of them endured spider bites that nearly took their lives away from them.

*Warning: Some images below might be considered gruesome to those who are squeamish and/or fear spiders.

Boulton was stepping out of the shower when she noticed a bump on her foot may have been that of a brown recluse bite. She went to the hospital and was prescribed medicine to help the bite, but it did not help. A few days later, Boulton started limping and her toe turned black. Her toe ultimately needed amputation, but the infection spread so quickly that they needed to remove her entire leg. She has undergone seven surgeries since then.

Owsley contracted necrotizing fasciitis, a flesh-eating disease, from walking straight into a brown recluse web and being bitten. She was playing hide and seek outside at the time. She initially ignored the swelling on her arm, but as it kept growing she knew she needed to do something. She was soon hospitalized for 41 days to treat the rapidly spreading infection. The infection attacks the skin underlying the muscles, nerves, fat, and blood tissues. Owsley says that since then, she’s had 15 surgeries and most of her arm has been cut away.

So, the question is, how can you prevent a nasty spider bite like this? According to Rick Vetter, a retired professor at the University of California, it’s difficult for most doctors to diagnose a spider bite and sometimes end up misdiagnosing. He says, “There is no way to test spider venom in part because the beads lodged under the skin are so minuscule, and doctors often diagnose based on ruling out other conditions and self-reports from patients.”

Additionally, Vetter says that conditions like fungal infections, diabetic ulcers, septic embolism, and even leukemia can be mistaken for spider bites. This leads to delayed treatment. He says that there’s really no one definitive way to determine a spider bite. If you see one biting in real-time or spot a dead spider nearby. Otherwise, listen to your own instincts and see a medical professional ASAP if you’re dealing with a red, tender bump that you are unsure about.

Be sure to SHARE this article to spread awareness about brown recluse spider bites!

Previous article: 9 Things You Used To Do When You Were Little
Next Post: Studies Show That People Over 40 Should Have A Three-Day Work Week