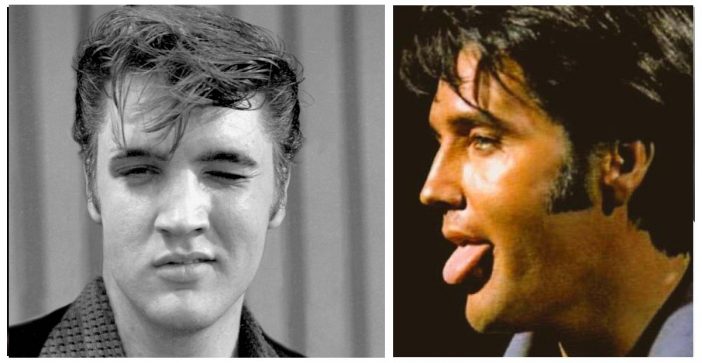 Elvis Presley was not only the King of Rock and Roll or the most handsome devil anyone laid their eyes on. He was also the King of Bloopers apparently, and there’s tons of them! Many of these outtakes take place in Elvis Presley’s prime, in the 1960s.

A lot of his bloopers happened live and of course, as a professional, all he could do was laugh it off with the crowd of screaming girls. Many of the outtakes consisted of him messing up and laughing during a song, which is nothing short of charming to see! It definitely proves that despite the rough exterior, he loved to have fun and goof around.

Nothing beats seeing a beautiful man like Elvis also smile and have fun with the crowd and himself. In this still he actually catches himself mid-cough starting out one of his hit songs “Heartbreak Hotel” and couldn’t help but laugh right after. He was trying to attempt a growl in the beginning of his songs, but actually coughed up some phlegm instead! Yuck!

This split photo shows a group of girls going wild over Elvis’ sweat rag. You heard right! He paused at the end of a song during his set to wipe the sweat off his face. Girls screamed every single time he wiped his face, so he threw it to the crowd of screaming girls to fight over.

In this hysterical photo, Elvis straight up forgets the lyrics to his own song. Ironically, he forgot the lyrics to the same song he got a bad, phlegmy cough to; “Heartbreak Hotel”! Must be an entertaining song for him!

Be sure to SHARE this article if you love goofy Elvis and be sure to watch the full outtakes video below!

Previous article: Out Of This World Facts About The International Space Station
Next Post: Their Uncle Passed Away, And The Car He Left In His Garage Made Them Millionaires